My take on: The Time of Women 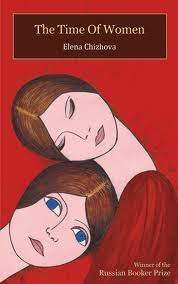 I don't normally post my reviews with such a large photo of the book, but I made an exception this time.  The cover of The Time of Women by Elena Chizhova attracted me before I knew what it was about. Just looking at the cover you know this has to be about mother's and daughters. After reading the book, I'm wondering which one is the mother and which one is the daughter. The women in this book have a reason to have their eyes open. They look out for danger. While the child in this book often seems very innocent.

Or you could look at the cover another way. The child is the one with her eyes wide open to the world. She is full of questions. She doesn't always understand what is going on around her. Anyway you look at it, the cover is beautiful. Up close it looks like a painting.

Set against the backdrop of Soviet Russia, three women nurture a young mother and her mute daughter. What they say is paramount. Almost nothing can be done without their approval.

Antonina is the unwed mother of Suzanna. The father is long out of the picture, but Antonina is lucky. She has found a room in a communal apartment with three old women. Glikeria, Ariadna, and Yevdokia serve as surrogate grandmothers to Suzanna, who has yet to find her voice -- literally. While Antonina is toiling away working at a factory, Suzanna is under the influence of her grandmothers. They reminisce about life before the rise of communism. It was different for everyone, which Suzanna often depicts in her artwork. She can't or won't speak, but uses her artwork to express herself.

Glikeria, Ariadna, and Yevdokia are very traditional, but also quirky at times. When Antonina brings a potential suitor to the house, he is met with skepticism. Any attempts to see Antonina's bedroom are out of the question. They're not married and such things just aren't proper. When a TV is brought into the household, it is a source of much comic relief. They didn't seem to grasp that the people on screen didn't live inside the TV.

It is fascinating to learn about other cultures. It's all told from a female perspective. You can feel Antonina's uncertainty about her life. She wants a better life, but is afraid to form one away from her surrogate mothers. Despite not being mute, Suzanna has an obvious curiosity about life. I was very close to rating this one superb, but a few things held me back. Sometimes it's hard to follow. The narration shifts between characters a lot. There were times when I thought Suzanna was narrating, but it was actually Antonina. It's not linear, which I'm not always a fan of. But overall, it was an entertaining read.

Note: I received a copy of the book from the publisher (Glagoslav Publications) in exchange for an honest review.
Posted by As I Turn the Pages at 1:15 AM