A little over a week ago, I had the pleasure of spending the day at Random House. It was a day for people who love to read and talk about books. It's between chef Marcus Samuelsson and Anna Quindlen talking to her editor Kate Medina for the best panel. I missed getting Marcus Samuelsson's book Yes Chef, but it's definitely on my list now. I only knew him as the judge on Chopped, but he is so much more. He sounds like a historian or a philosopher when he talks about food and it's role in our culture. As a chef he's also a storyteller, and it's important that come through in his cooking. I was amazed to learn that Kate Medina is the only editor Anna Quindlen has had in her nearly 25 years at Random House. As she put it Kate Medina speaks fluent Quindlen. They seem like such good friends.

The video above pretty much sums up the day.  I feel famous because one of my many Tweets that day made it into the video (takes so little to make me happy)!!!

Here is a picture of the books I picked up at Random House: 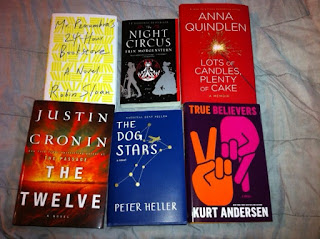 Bought:
Mr. Penumbra's 24-Hour Bookstore by Robin Sloan (not a Random House title but it was recommended during the lunchtime panel)
The Night Circus by Erin Morgenstern
The Twelve by Justin Cronin (I own The Passage but I haven't read it yet!)
The Dog Stars by Peter Heller
Gift bag:
Lots of Candles, Plenty of Cake by Anna Quindlen
True Believers by Kurt Andersen
Posted by As I Turn the Pages at 12:10 PM