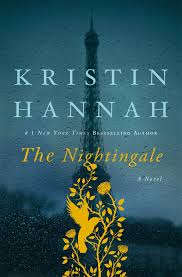 According to my Goodreads account, I started reading The Nightingale by Kristin Hannah on January 19 and finished on August 10. Seven months to finish a book? It shouldn't take that long. But I made the mistake of starting this book the week before my final semester of grad school. Once school started, reading for pleasure took a backseat.

Although.....I did manage to finish other books because of blog tours. I picked up The Nightingale, put it down, picked it up, put it down, picked up, put it down. It's not because I didn't like the book. From January until the end of April, my free time was scarce. After that, I was catching up on sleep and the mountain of shows on my DVR! But I was determined to finish this book. It takes place during World War II and I love historical fiction.

Two sisters, one conservative and controlled the other a free spirit who won't be contained. At the height of the war, both will be put the test, risking not just their freedom but their lives. Viann's husband, Antoine, is a soldier, fighting against the Germans trying to take over France. In Antoine's absence, Viann has to be both a mother and a father to their daughter, Sophie. She doesn't have time to deal with her wayward sister, Isabelle. The Nazi's are overtaking the small town of Carriveau. Food is scarce. The town is in shambles. Not a good time for Isabelle to get kicked out of yet another school, or to bring her ideas of a "Free France" to town.

Viann is forced to house a Nazi soldier in her home. It's the only way Viann can keep her home and her family safe. Isabelle disagrees. Isabelle wants to do more than just sit back and live according to the rules set by the Nazis. There has to be a way to fight back. But fighting back can put her life at risk. She has to leave Viann and Sophie. She has to help others. Neither sister believes in what the other is doing. Both sisters believe that the other is wrong. Neither sister wants to back down.

While this is a fictional story, The Nightingale is based in reality. It's well-researched. The book shows that Isabelle is more than just a wayward, fly-by-the-moment woman. She has a good heart. Viann is stronger than she realizes. She does whatever it takes to hold her family together. It's a story of love and family and the ties that hold us together. Definitely a book worth reading!

Note: I received a copy of the book from the publisher (St. Martin's Press) in exchange for an honest review.
Posted by As I Turn the Pages at 1:07 PM