My take on: I Know You Know 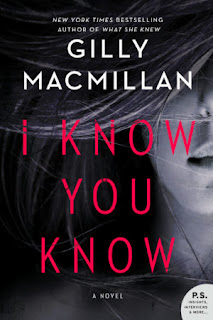 I love crime/thriller books and I'm on a bit of a run with those books right now. The last book I finished was by Karin Slaughter, clocking in at almost 500 pages. Generally I like to switch genres after I've just finished a book, but I made an exception with
I Know You Know by Gilly Macmillan. With a title like that, there has to be a good story behind it.

This centers on two murder cases -- twenty years apart. In 1996, friends Charlie Paige and Scott Ashby were murdered and dumped like trash behind a dog track. A young man, Sidney Noyce, with the mental capacity of a 10-year-old was convicted of the crime, but there have always been doubts about his guilt. Fast forward twenty years and the same detective, John Fletcher, who found the bodies of Charlie and Scott, is working a new case with eerie similarities to the past. Fletcher has never forgotten about the case that made his career, especially since Charlie died in his arms. Now he must decide if the two cases are related.

Memories of Charlie and Scott also haunt their best friend Cody Swift. He's convinced the wrong man was convicted of the crime. After years away from his hometown of Bristol, Cody has returned to confront the past and to learn what really happened to his friends. But at what cost? Dredging up the past can only open painful wounds. To get at the "truth" Cody starts a podcast, speaking with investigators, reporters, and relatives of Charlie and Scott. He will have to get people like Charlie's mother, Jess, to confront harmful memories. Jess has moved on and started a new family, and has no interest in speaking to Cody.

There are a lot of layers to this book. Not everyone is what they seem. At first, Fletcher presents as an earnest detective. He believes with his whole heart that the right man went to prison. But with each chapter, it's clear the mistakes and liberties that Fletcher took with the case. He's not the most scrupulous detective, Fletcher is somewhat corrupt. He tries to stay on the right side of the law, but gets pulled in other directions. Jess is very much the grieving mother. She has deep regret for how poorly she raised Charlie, and is determined not to make same mistakes with her daughter, Erica. But even she is deeply flawed. It's understandable that she has no desire to participate in Cody's podcast, but her reasons are not completely genuine. She doesn't want to revisit the person she used to be, and she doesn't want Cody digging into her own actions the night Charlie died. Why? What does she have to hide and why? There are so many pieces to the puzzle, and it was intriguing seeing how the past connected to the present. Who is guilty? Who is innocent? What was the endgame? Why were Charlie and Scott murdered? What was the motive? It was a thrilling ride and I would definitely read another book by Gilly Macmillan.