I have an unpopular opinion

First, where have I been. Always reading, but of course there were some books that I put aside (The Witch Elm by Tana French) because they were boring me. Second, I just finally figured out how to get back into my Blogger account after Google+ went down. :)

And....I've been trying to gather my thoughts on a very very popular book I just read. Whenever I read a well-reviewed or hyped book, I wonder if I should read it all. (Gasp) What if I don't like it? All those great reviews, and I question if I read the same book. I think back to reading Modern Lovers by Emma Straub, that had good reviews and I was swayed to read it by the pretty cover. But I was sooooooo disappointed. It's even worse when you read a book by a person you like and admire.... 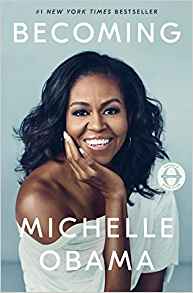 ...yes...I regret to say...I was underwhelmed by Becoming by Michelle Obama.

What fell short for me?

I appreciate that a book by a former First Lady was not all about her husband. Especially since her husband is portrayed as Superman. I'm not kidding, there is A LOT about how special and unique a person Barack Obama is. I did want more of Mrs. Obama's perspective on her time as First Lady. The White House years are not addressed until page 283 and by then we're more than 60 percent into the book. I felt like there was a lot of buildup to those eight years in the White House, but the actual eight years in the White House were kind of glossed over. Reading the book, I could totally understand her disdain for politics and campaigning. I remember the scrutiny Mrs. Obama herself and her family were subjected to, I often wondered what it must be like to live in a fishbowl. I thought that kind of perspective would be in her memoir, and I didn't get that.

Keep in mind, I don't say any of this as a criticism on Mrs. Obama as a person. This is purely my thoughts on her book. I feel like I need to say that because sometimes people think a criticism of a book or content is a criticism of the person. It's not! You can like a person and what they stand for and still critique their book. No regrets in buying this book. I would do it again. I'm quite sure Mrs. Obama will write another book, and I will absolutely buy it.
Posted by As I Turn the Pages at 1:01 PM