My take on: Escaping Exodus 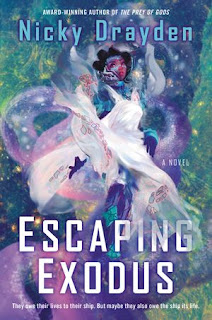 As much as I like to think I’m not a book snob, I really am a book snob. Contemporary and historical fiction tends to be the sweet spot for me. The occasional horror or mystery isn’t bad either. But sci-if and fantasy are often a struggle for me. I tend to give up on sci-if and fantasy quickly, more so than any other genre.

I almost gave up on Escaping Exodus by Nicky Drayden. Just 20 pages in, I thought I can’t do this. I don’t understand! However....I pressed on because I realized I was being shortsighted. I’m so glad I kept going because I would have missed out on a smart, inventive, and engaging book.

Earth is long gone. Habitable planets don’t exist. Instead societies survive inside the cavernous bodies of space beasts. Yes large animals, that I have to assume are the size of large cities. “Beastworkers” aka laborers, are tasked with excavating the bodies of the beasts, all at the behest of the upper class. Seske is next in line to lead one of these colonies. Seske is reluctant to take on that kind of power because it means she will have to get married. Betrothal to a man or a woman is allowed. Although in this matriarchal society, marriage to a woman is preferable. Women in this society have the power, and men are seen as the weaker sex. Oh the irony! Imagine a world where it’s not safe for men to be out after dark! Seske would love to court her best friend, Adalla, but that’s a pipe dream. Although Adalla is woman, she is also a beastworker and therefore not a suitable mate for Seske.

Hopes of true love dashed, Seske and Adalla have to learn to live without the other. Meeting together in secret won’t work. Plus Seske has to watch her back, as someone close to her is plotting to take her place as leader. Seske instead chooses a male, Doka, as her husband. Adalla tried to move on but as she learns more about beast work and the rules of society the more she rebels, vowing to change some of the more barbaric and violent ways of their world. Seske rebels in her own ways, too. Defying her mother, Matris’s, more totalitarian ways, Seske wants to embrace more modern ways, like new technologies and listening to the will of the people instead of trying to snuff it out.

I ended up liking this much more than I thought I would. Getting past my early brain block, I could see all the parallels to modern-day society. When people want change, there will always be someone or something that tries to block it. There’s racism, sexism, and classism throughout this book. All of which bring down this world. New ideas are crushed. People don’t feel free to be themselves or free to be with the one they love. The ending is a little bit out there, overall I found this book to be very relatable and enjoyable.

Notes: I received a copy of the book from the publisher (HarperCollins) as part of a blog tour with TLC Book Tours.