My take on: Darling Rose Gold 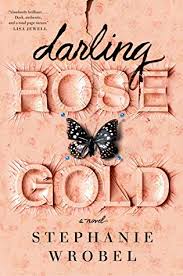 Rose Gold Watts has been poisoned all her life, literally and figuratively. Her mother, Patty, led Rose Gold to believe that she was born sick. There was never a moment when Rose Gold was healthy. Patty took her to doctor after doctor, consented to countless medical procedures – including a feeding tube, all the while playing the dutiful mother. She’s comforted Rose Gold after a tough surgery, cleaned up after her, dressed her, and bathed her. Friends and neighbors help by offering their support. Through it all, Patty is always a devoted mother, doing anything and everything to cure her daughter.

But what if it was all a lie? What if Patty was making Rose Gold sick? Why would a mother do such a thing? How does Rose Gold even begin to recover? I was intrigued by all of those questions posed in Darling Rose Gold, a debut novel by Stephanie Wrobel.

The first eighteen years of Rose Gold’s life were controlled by Patty. With her mother now in prison, Rose Gold is experiencing the freedom she was once denied by her mother. She looks at foods, technology, makeup, clothing, movies, and just the world in general with wide eyes. Everything is a new taste. A new experience. Why did her mother try to keep the world from her? Not everything in the world is bad. Despite being deeply self-conscious about her physical appearance, Rose Gold puts herself out in the world. Not everything turns out the way she wants it. She works a dead end job at a retail store. She meets her online boyfriend, but is quickly disappointed. Her father, whom Patty said was dead, reunites with Rose Gold – but even that relationship quickly fractures.

Freedom is great but life hasn’t gotten much better for Rose Gold. Why? Do all roads lead back to Patty? Rose Gold starts to visit her mother in prison. She wants to know why Patty poisoned her. But will she get the answers she wants?

Five years pass and it’s time for Patty to get out of prison. Rose Gold, now a mother herself to baby Adam, wants to put the past behind her. Or so she says (hint hint). It defies logic that Rose Gold would take in the one person who damaged her life. But Rose Gold lets Patty live in her home. But does Rose Gold have an ulterior motive? She’s no longer a little girl that Patty can control. Maybe it's time for revenge? However, Patty is certain she can get the upper hand again, and maybe even assert authority over Rose Gold’s life like she once did.

I was definitely hooked by this story. Rose Gold and Patty are complicated and unlikable characters. Yes, Rose Gold was also a bad character. In the beginning, Rose Gold was sympathetic because her childhood and trust in the world was so badly damaged. Once free, every little setback or slight rejection became a reason for Rose Gold to go to the extreme. But I guess that was a deliberate choice by the author. Patty was a horrible person, from beginning to end. For Patty it’s all about power and who she can control, who she can manipulate. It all made for an engaging and compulsive read.

Note: I received a copy of the book from the publisher (Berkley) in exchange for an honest review.
Posted by As I Turn the Pages at 12:01 AM