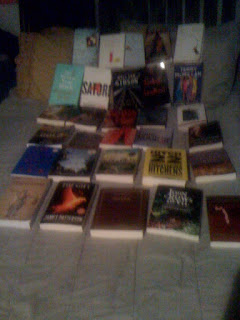 Take a kid and put him or her in a building the size of a football stadium with every piece of candy in the world and see what happens. That kid won't know where to turn, they'll want every piece of candy they can get their hands on. That's how I felt today at BookExpo America. There where so many books, talks and author signings I wasn't sure where to go first. That picture to left (I know it's not great, but I can't expect much from a cell phone camera) is the haul I came home with. A grand total of 30 books, and that's not including the ones I gave to my family.

I arrived just before 9am, this after working the night before. I work a night job, so I got about four hours of sleep before heading to Manhattan. But I had a plan. I mapped out the 25 booths I wanted to hit. I had a big bottle of water. And I was ready to hit the floor.

The day started with a bit of comic relief at the Javits Center. I asked a guard where I could register, and he points me to the other side of the convention center. I make my way through the sea of people only to be told I had to go back where I came from and register at the press office. Ugh!!! It's no easy task getting from one side to the other. When the doors finally opened you would think some people hadn't seen a book in years. It has to be said, some people were like vultures. They took four or five copies, when one or two would have sufficed.

I had a plan of hitting at least the 25 booths on my list, going to one of the conference sessions and get an autograph or two or three or 10!! Not only did I get to all of the booths on my list, I also walked every aisle of the Exhibit hall. Not an easy task. After a while it felt like I was hauling bricks instead of books. I tried to get on the lines for autographs from Mary Higgins Clark and Tim Gunn, but those lined stretched from Manhattan to Texas!!! I did get an autographed copy of Dismantled by Jennifer McMahon. I didn't care for Promise not to Tell by McMahon, but I told a little white lie and told her I did like it. This new book might be good. Besides what are the odds she'll read my blog??? Shhhhhhhhhhh!!! Don't tell!!!

The author's luncheon was equally entertaining. Not just for the funny stories told by Patton Oswalt, Sara Gruen, Christopher Hitchens and William Gibson, but because it gave me a chance to sit after walking around for hours. I popped my head into the Book Blogger Reception before hitting the road. I'll get to know more of my brethren tomorrow at the convention.

I have to tell you, that walk from Penn Station to the Javits Center was rather quick for me in the morning. But heading home it was another story. My legs felt like they were sticking together in the heat. And that walk was like climbing Mount Everest. I don't think I'll be able to lift my arms very high for a while!!
Posted by As I Turn the Pages at 8:49 PM