My take on: The Belles 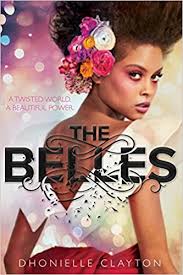 There are several heavily hyped YA books out this year, and The Belles by Dhonielle Clayton is one of them.

Is this book worth the hype?

I think the concept is original. In Orleans, beauty is a commodity. It's a commodity that not everyone can afford. Only very special women, called Belles have the power to control beauty. The Belles harness that power, and figuratively speaking turn ugly ducklings into swans. The people of Orleans are borne with grayish skin and red eyes. Darker skin is the ideal, and the only way to achieve this is to go to a Belle. The Belles hold a lot of power. In the wrong hands, this power could bring down a kingdom.

Again, I think the concept of this story is great. Now, did I like the execution? Nope. Fair warning, mild spoilers ahead!

Let's start at the beginning. Camellia Beauregard is a Belle, and she dreams of the coveted position of being "the favorite." What does that mean? The royal family picks the favorite, and that Belle gets to live at the palace. The favorite gets the coveted beauty assignments for the royal family. It's an opulent life that Camellia wants. But she's competing against her fellow sisters. Camellia is not like the others in that she rarely follows the rules. She's always testing the boundaries of her power and the patience of the head Belle, Madame Du Barry.

Camellia is like a lot of YA heroines, the rules apply to everyone but her. She can break the rules because she's special and knows everything. This is a YA trope that I'm soooooo sick of. I guess that was strike one for this book.

What was strike two? Why does anyone want to be the favorite? It wasn't really clear to me why this is a thing to obsess over. Like life will be over if someone doesn't get this position. Initially Camellia isn't the favorite and it makes her feel like a failure. But when she finally becomes the favorite, her life becomes worse and not better. So was it really worth it? Being the favorite also comes with a price. Camellia ends up being at the beck and call of Princess Sophia, who wants more than to become beautiful. Sophia wants what Camellia has. She wants Camellia's power, and that puts the new favorite in an awkward position. The Queen will do anything to prevent her daughter from ascending to the throne. Sophia would do more harm than good to Orleans. Sophia delights in causing others pain, emotionally and physically. What will Camellia do?

This book had a lot of potential, but it reads like the first book in a series. Because it's the first in the series, so much time is spent on world-building and introducing characters. I also felt there were a lot of unnecessary characters. The author made an earnest effort to have a diverse group of characters, but there were some that just felt like throwaways. For instance, there are gay characters in the book. But I didn't feel making those characters gay added anything to the story. There's a random sexual assault, so tread lightly. It wasn't until the last 100 pages that I felt the book found it's footing. And then the last page of the book is literally a cliffhanger!! I hope book 2 is better, yes I will be buying it! Despite my issues with this book, I do want to know how Camellia's story ends!