My take on: How I Resist 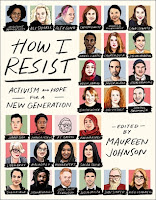 The 2016 election was looooonnnnnnnnggggg and often times exhausting. On election night, when it became clear who the new White House resident would be, I turned off the TV. I also stayed away from news broadcasts and social media for about 10 days. I have the Twitter app on my phone, and I was looking at it constantly. One of these days, I have to take it off my phone. It's just hard to do. After weeks of constant consumption of media during the election, I just had enough and needed to step away for a little while--for my own sanity. My mindset: Give me a marathon of any Real Housewives show over that mess!

Now fast forward to 2018, I'm one of those people who longs for the days when we had a president who spoke in complete sentences! How did we get here? It's NOT NORMAL for there to be CONSTANT dysfunction coming from the White House. It's exhausting to see, read, and hear about the week's latest distraction. How does one not let the dysfunction consume them? How does one find joy in this madness? Or how does one resist? There's no right answer to those questions, but it's up to everyone to find what works for them. That's the prevailing message of How I Resist: Activism and Hope for a New Generation edited by Maureen Johnson.

How I Resist is an inspiring collection of essays about activism. Several prominent authors and entertainers, including Jacqueline Woodson, Jodi Picoult, Jennifer Weiner, Jason Reynolds, Jesse Tyler Ferguson, Rosie O'Donnell and others, lent their voice to inspire and provide guidance for navigating these turbulent times.

The essays offer a wide range of advice and tips. What if we put grandmothers instead of police officers in charge? Would there be less crime? It's a funny thought, I mean who wasn't afraid of a grandparent when they were young? But there is also a serious side to this book. It's easy to get caught up in your own bubble, only consuming media that aligns with your line of thinking. What about the other side of the spectrum? In this case, does anyone stop to think why people voted for the current White House resident? If you don't understand your perceived enemy, how can change ever happen? I personally don't understand how people could vote for this. . .this. . .chaos! I'm not sure I would want to, but I get the argument being made in this book.

Resistance can take all forms, but most important remember it's ok to make mistakes along the way. Learn everything you can, so that you can make informed decisions. Reading books and supporting your libraries are essential tools to resistance. One of the best essays was by author Malinda Lo. Like me, she consumed a lot of media before and after the election. She struggled with ways to resist. Is her profession writing fiction really a form of resistance? How could she make a difference with her writing? Easy. Doing what you do best and being yourself is a form of resistance because you're not letting someone else steal your joy.

I could go on and on, but then you might not read the book if tell about every essay. Bottom line, I recommend giving this one a read!

Note: I received an e-galley from the publisher (Wednesday Books) in exchange for an honest review.
Posted by As I Turn the Pages at 3:57 PM