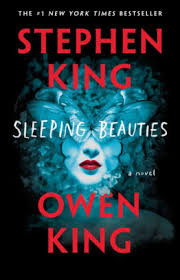 From the minds of Stephen King and his son Owen King, comes Sleeping Beauties. All the women, including children, of the world fall asleep and don't wake up. As they fall asleep, threads of white cover their bodies. Soon the white cocoons cover their entire bodies. The few women who can stay awake become shells of their former selves. The men? What do the men do? They try to cope, doing all the tasks that their wives and girlfriends used to, like cooking, cleaning, laundry, and caring for children. Some men are grief stricken, but some are just violent jerks. And it's the violent jerks who are threatening to take over, starting with the small Appalachian town of Dooling.

The women are asleep in one world, and thriving in another. In the new world, women run the show and everything is different. No major conflicts. No wars. No sexual assault. And the men who will be born in this new world, will be influenced by women only. They will have a better foundation than the men of the old world. In a world like this, why would they want to wake back up in the old world?

But what happens to the men of the old world? Can a world exist where just the men are in charge? One could argue that we're already seeing that in the modern world.

This isn't the typical Stephen King novel. Number one, I found it to be very fast-paced (even though it's 700 pages) and I chalk that up to his son co-writing this book. Number two, the book isn't meant to be scary like a horror movie. I think this book was meant to be a social commentary on today's political climate, and that can be scary. But like a typical Stephen King book, the ending is always problematic and doesn't seem fully formed. Seriously, I think King is great at beginnings and the middle. . .but his endings, after all this time in publishing, still need work. Exhibit A: IT!!! The ending for the TV adaptation of Under the Dome was ATROCIOUS and I can only imagine how the book ended (I'm thinking of reading it this year).

While I did enjoy Sleeping Beauties as a means of escapism, I felt some parts of the ending were just a bit rushed and heavy-handed. A white female police officer and her itchy trigger finger shot and kill a black woman. While the officer believes she was defending others, it turns out she misunderstood the situation and is immediately remorseful (as she should be). It's clear that little nugget is meant to be a reflection of the multiple shootings of unarmed black men and women. I don't see anything wrong with social commentary, it's just that this particular one came less than 50 pages from the end and felt like an afterthought. The overwhelming message was men step back and let women run the show. I don't think that will ever happen in my lifetime, even if we get a female president, but it's a nice thought.

Rating: Superb (as a piece of fiction, not as social commentary).
Posted by As I Turn the Pages at 12:41 PM