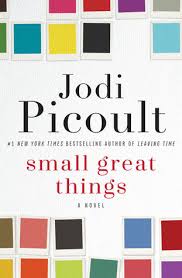 I have read several books by Jodi Picoult, including Mercy, Plain Truth, Salem Falls, My Sister's Keeper (my favorite book by her), The Tenth Circle, and Nineteen Minutes. I also have several of her books on my TBR: House Rules, Sing You Home, Leaving Time, Between the Lines, and The Storyteller. Her books take up almost an entire shelf on my bookcase. She's an automatic buy author for me. I might not buy or read the book when it comes out, but eventually I will get there. This long preamble is all to say that I'm a fan of Jodi Picoult's books, but I finally got around to reading Small Great Things.

This book has been out for three years, and I knew going in that Jodi Picoult tackled a tough but timely subject matter: racism. I wanted to read it because I was curious what her perspective on racism would be. I had high hopes. It pains me to say that I had a love/hate/indifference relationship with this book.

The basic premise: a black labor and delivery nurse, Ruth Jefferson, is removed from caring for a newborn and his mother. Why? Because the parents, Turk and Brit, are white supremacists and they don't want anyone who looks like Ruth caring for their family. Ruth's supervisor goes along with this ridiculous request and puts a note in the file that no African-American employees are to care for this family. Ruth spends the next few days stewing about this, acting like she doesn't care and even making mean-spirited comments about the baby and the family. An act of fate leaves Ruth as the only nurse available to look after the baby, an emergency ensues, the baby is in distress, and eventually dies. Ruth is the sacrificial lamb, as her actions or lack of action are blamed for the baby's death. She's arrested and charged with murder. Her white, well-meaning attorney, Kennedy McQuarrie, is determined to get an acquittal but refuses to bring up race during the trial. All of this has the makings of a good book (and eventually a movie, as Viola Davis and Julia Roberts are attached to the project).

This could have been a thought-provoking book, but in my opinion it's not. Picoult clearly did a lot of research on racism, white supremacy, medical and legal procedures. But this reads like a book saying: "Look at all the research I did! Look at all I found out about racism!" Lets list all the things that are in this book: colorism; racism in many forms; white supremacy; while Ruth is sensible her sister, Adisa, is the militant black woman; workplace discrimination; Ruth's mother works for a white family for decades while ignoring the obvious class-ism. The message is clear, we all have our own biases and therefore racism is bad. But that message in this book is so heavy-handed. Right after Kennedy handles Ruth's arraignment, all of a sudden she's thinking about racism in every scenario. Really? Right after meeting Ruth this lawyer is suddenly aware of racism. Kennedy's character is a public defender and has countless clients of color, but it's not until Ruth that she gives any thought to racism? Oh did I mention that the prosecutor in Ruth's case is also African-American. Yes, so everyone can see the irony of a black woman going to bat for the baby born from white supremacists parents. This book wouldn't be a Jodi Picoult book if it didn't have a twist. I won't say what that is, but it was sooooooooo out of left field and just plain unnecessary.

This book includes an author's note at the end. Many times while reading the main text, I was tempted to skip ahead and read the author's note. But I resisted the urge. I didn't read it until I was done with the book. The author's note pretty much confirmed what I thought while reading the book: this was not written for African-American people, like me. It was clearly written for white people, those who aren't racist but might not be aware of their own subtle racist tendencies. I believe 100 percent that Jodi Picoult had good intentions with this book, but I wish she hadn't written this book. Having read other books by her, I can attest that the medical jargon and courtroom scenes felt authentic; that's definitely in her wheelhouse. But everything that had to do with race just didn't feel authentic. I'm not saying a white person can't write about issues impacting the African-American community, but it should at least feel authentic and not like "See! See! This is what happens when you're racist!"

Clearly, I wasn't enamored with this book but that hasn't stopped me from being a fan of Jodi Picoult. I will still continue to buy and read her books.