My take on: Butterfly Yellow 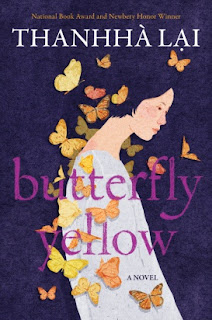 I always find books about families so easy to get into – more so than any other type of book. Perhaps because there’s always something I can identify with. Love. Loss. Laughter. Sadness. Happiness. Up and downs. And everything else in between. Butterfly Yellow by Thanhhà Lai is one of those stories.

The Vietnam War is over and it’s been six years since 18-year-old Hằng has seen her brother Linh. In the latter days of the war, Hằng brought Linh to the airport, in an attempt to get to safety in America. But Linh’s brother is taken from her, leaving Hằng and her family to pick up the pieces. In years past, Hằng has lost everything that was important to her. Her parents and grandmother are dead. The joy of one day being reunited with Linh is all that Hằng has left to cling to. She makes the dangerous journey from war-torn Vietnam to Texas, armed with an address that will lead straight to her brother.

In Texas, relatives beg Hằng to have some patience. She knows nothing about American culture. How will she pay for things? What about school? She barely knows English, and what she does know all comes from watching movies. She really is a fish out of water. But that doesn’t matter to Hằng. She’s determined to reunite with Linh. She’s determined to tell him how much she missed him. How much she loves him. How much he was loved by their parents. Remind him of everything he loved about their homeland, the culture, the food – just everything. Everything will be all right if Hằng can just see Linh. Everything will be all right. Practicing patience just isn’t going to work. Against her family’s wishes, Hằng sets out to find Linh on her own.

Wannabe-cowboy LeeRoy wants no part of the conventional life his parents want for him, instead he wants to pursue his dreams of being a star on the rodeo circuit. Dreams that get derailed by Hằng. He gets shamed into helping Hằng find her brother. He tries to be friendly to Hằng but is initially rebuffed. Hằng is reluctant to accept any act of kindness, after the horrors she saw escaping Vietnam everyone who isn’t family is the enemy.

Finding Linh proves to be difficult as the address Hằng has leads to a crumbling, abandoned building. But the kindness of another stranger leads Hằng to her brother’s front door. But Hằng is promptly rejected by Linh, as he literally closes the door in her face. He is no longer Linh. He is now David, an American boy who loves his home, his American adoptive mother, sports, and horses. A sister, whom he has no memory of, is not on that list. But Hằng is determined to breakthrough David’s hard shell. LeeRoy reluctantly helps her. Both work on a neighboring ranch where Linh rides his horse every day. If Hằng can’t fully be in his life, at least she can see her brother every day. But is that enough? How do you get someone to truly see and love who you are if they won’t even acknowledge your presence?

To me, the unconventional friendship between Hằng and LeeRoy is what carries the book. These two don’t have much in common and sometimes it’s hard for both to understand each other. Language is a barrier to start, but it ends up not being a big problem. The real problem – both fail to see the other’s humanity. In the beginning, does LeeRoy really care what happened in Hằng’s past? No he doesn’t. But as he starts to care for her, LeeRoy sees the pain and desperation in Hằng. On the flip side, Hằng sees LeeRoy as more than just an annoying American. She sees he has more hopes and dreams than his parents give him credit for. Together they chip away at David’s frosty demeanor. As friends and maybe more, the future isn’t so uncertain.

Note: I received a copy of the book from Wunderkind PR in exchange for an honest review.
Posted by As I Turn the Pages at 2:17 PM