My take on: The Astonishing Color of After 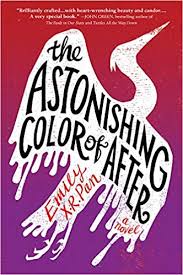 Love, grief, regret, and suicide are heavy topics on their own. The Astonishing Color of After by Emily X.R. Pan tackles them all, but with a magical twist.

One of the greatest moments in life is experiencing love for the first time. Leigh Chen Sanders is in love with her best friend, Axel, but doesn’t know how to tell him. Then, one day the longtime friends share a kiss. A kiss that could have marked a new beginning in their relationship, but life has a way of intervening. While Leigh and Axel were getting closer, Leigh’s mother committed suicide. After years of crippling depression, Leigh’s mother, Dory, could no longer handle the pain. The family is now left to cope on their own. Leigh feels guilty for being with Axel; in her mind if she had been home maybe her mother would still be alive. It’s not Leigh’s fault, but coming to that realization will take time.

Before she can fully understand her grief, Leigh becomes convinced that her mother has turned into a bird. Her spirit has left her physical body and is now free inside of a bird. Her father doesn’t believe Leigh, thinking it’s a figment of her imagination. But Leigh is determined to find the bird. Determined to find her mother, but doing so means digging into her mother’s past. She decides meeting her Taiwanese grandparents for the first time, people who had been estranged from Dory for decades, is the best course of action. Instead of marrying someone of Taiwanese or Chinese descent, Dory fell in love with and married an American man. A choice that ran afoul of her parents’ lofty expectations. Despite language and cultural barriers, Leigh wants to meet her grandparents. Traveling to Taiwan and connecting with family could be the key to finding her mother the bird.

Meeting her grandparents is both good and bad. Good that Leigh gets to know the kind of person her mother was before she came to America. Leigh gets to see all of her mom’s favorite sights, eat her favorite foods, and learn about her overall life in Taiwan. On the flip side, Leigh starts to unearth painful memories. Memories that both Leigh and her grandparents are afraid to confront. Maybe it’s time for Leigh to let go. To let her mother go. To know that no matter what she did, where she was, or who she was with, it’s not Leigh’s fault that her mother ended her life.

I’m in the middle when it comes to this book. On one hand, I thought this was pretty good. On the other, I’m like what does this all mean? Am I missing the metaphor? Am I missing the symbolism? Or (the likely root cause) I just struggle when a book isn’t fully set in reality. I realize most books without any magic, sci-fi, or fantasy elements are much easier for me to wrap my brain around. But let’s focus on the good, I thought this book beautifully portrayed the ups and downs of grief, the roller coaster that is depression, and the whirlwind of first love.