Gone Girl: The book vs. the movie

Ok, there is no way for me to talk about Gone Girl by Gillian Flynn without SPOILERS. So please if you have not read the book or seen the movie COME BACK LATER when you do!

Ok I'm going to insert a big picture of the book so you don't see the rest! 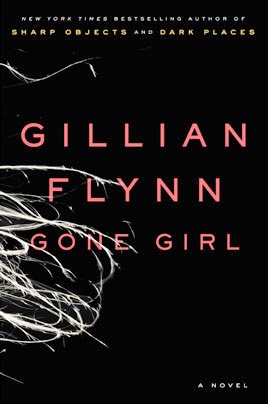 Still here? Ok lets dive in. I don't often say this, but I HATE this book. If you've read the book, you know the basics. On their fifth anniversary, the lives of Nick and Amy Dunne are turned upside down. Amy "disappears" without a trace. Nick is automatically the suspect. As a tradition, Amy leaves a treasure hunt of clues for Nick to find his anniversary present. Only this time the clues are leading police to believe that Nick is guilty of murder. Halfway through the book there is a "twist." I bought this book almost 18 months ago, and over that time I've heard about that "twist" multiple times.

Honestly, that "twist" is not a "twist." Amy isn't dead, instead she's framing Nick for her murder. It would have made for a good plot device if I didn't find this book so pretentious and misogynistic. As a character, Amy is supposed to be so smart and witty. She is just above everyone, including Nick. Yet, while Amy is on the run she gets robbed of several thousand dollars because she acted so STUPID! When she calls on creepy Desi Collings (Neil Patrick Harris in the movie), she does so in a casino. While reading the book and watching the movie, I couldn't help but think casinos have cameras EVERYWHERE! Really there is no way that's not going to come back and bite that pretentious psycho in the you know what! But it never does. Nick Dunne is equally frustrating! Every other chapter Nick Dunne is either expressing or thinking about his hatred for women. These two morally corrupt people deserved each other! Although in the movie, Nick's hatred is restricted to Amy.

Despite my dislike for the book, I was thoroughly entertained by the movie and the performances. Now how is that possible? The movie gave life and depth to Nick and Amy Dunne that just wasn't there for me in the book. Rosamund Pike absolutely nailed the role of psycho chick. When she's plotting and eventually killing Desi, it's chilling and slightly funny at the same time. When she returns to her "doting" husband, Ben Affleck delivers the line of the year! If you've read the book or seen the movie, you know what I'm talking about. Just give Rosamund Pike the Oscar now because I don't see how anything could top that performance. I was captivated with Amy Dunne as a movie character, but I hated her as a book character. The "cool girl" girl speech in the book sealed my dislike of Amy.

"Go ahead, shit on me, I don't mind, I'm the Cool Girl. Men actually think this girl exists. Maybe they're fooled because so many women are willing to pretend to be this girl. For a long time Cool Girl offended me. I used to see men--friends, coworkers, strangers--giddy over these pretender women, and I'd want to sit these men down and calmly say: You are not dating a woman, you are dating a woman who has watched too many movies written by socially awkward men who'd like to believe that this kind of woman exists and might kiss them. I'd want to grab the poor guy by his lapels or messenger bag and say: The bitch doesn't really love chili dogs that much--no one loves chili dogs that much! And the Cool Girls are even more pathetic: They're not even pretending to be the woman they want to be, they're pretending to be the woman a man wants them to be. Oh, and if you're not a Cool Girl, I beg you not to believe that your man doesn't want the Cool Girl."
-- Pgs. 222-223

Some or all of that might be true, but it just comes across as smug! I don't like smug people in fiction or in real life. This entire book is SO SMUG! But I was able to separate the book from the movie. I know Gillian Flynn also wrote the screenplay, so I was scared that the smugness of the book would be there in the movie. I was surprised she was able to to edit herself. Authors are so close to the source material, I would think it's hard to move from page to screen. But hats off to Gillian Flynn for keeping the best parts of the book intact and getting rid of the rubbish. The score by Trent Reznor and Atticus Ross was outstanding, it was like another character. Director David Fincher was the right person for this. The movie was just the right mix of psychological thriller and dark comedy.

I really, really, really, like the movie, but it's not without flaws. No. 1: the casino incident I mentioned. No. 2: the wackadoo couple who stole Amy's money could come forward at any moment. No. 3: the ENDING. Oh, that ending. While there are slight differences between the movie and book endings, but the result is still the same. Amy forces Nick to stay in the marriage with a SURPRISE pregnancy. That still frustrates me. Nick should have found some way to get out, legally or illegally (hint hint Gillian Flynn). If he had, my opinion of the book would have been totally different. In the movie, that faux dream-like sequence of Amy Dunne drowning in a lake should have come true by the end! That psycho deserved a little karma!

What did everyone else think?

Book rating: Meh
Movie rating: O.M.G.! (mostly for the performances by Rosamund Pike, Ben Affleck, and Carrie Coon)
Posted by As I Turn the Pages at 7:53 PM