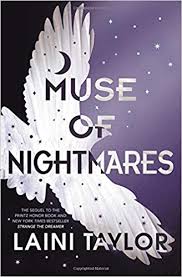 Why delayed reaction? I finished Muse of Nightmares by Laini Taylor while I was on vacation.

What did I think of book 2 in this series? I don't want to be mean . . . but I think this book was worse than Strange the Dreamer. Muse of Nightmares picks up where book 1 left off but it was no less confusing.

I don't have much to say but I'll try my best to articulate my frustration with this book.

In order for me to talk about book 2, I have to spoil book 1.

Sarai dies at the end of book 1, but is resurrected as a ghost under Minya's control. Having Sarai at the mercy of her enemy could have been a cool storyline for Muse of Nightmares, but the way it was presented got to be repetitive. Sarai and Lazlo's love story was also repetitive. Every time they're interacting, we're reminded how much they want and lust after each other. UGH...boring. Then there is a completely secondary storyline, between two sisters Kora and Nova, which was incredibly hard to follow. The connection between Sarai/Lazlo/Weep and Kora and Nova occurs very late in the book. At page 327, the author is still explaining how this society works, which was frustrating and hard to understand.

This is supposed to be a two-book series, but even if it isn't I don't see myself wanting to revisit this world again. I'm done.