My take on: The Perfect Son 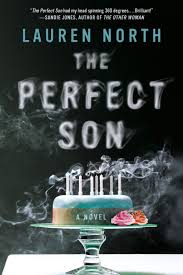 The Perfect Son by Lauren North explores the complexities and darkness of grief. When the book opens, Tess is in the hospital recovering from a stab wound. She doesn't know how she ended up in the hospital. Or who stabbed her? The only thing Tess knows for sure is that her eight-year-old son, Jamie, is missing. It's just another heartache for the recently-widowed mother.

Just a few months have passed since her husband, Mark, died in a plane crash. Tess can't lose Jamie, too. Her son is the only person that makes life worth living.

Before she was lying in a hospital bed, Tess was looking forward to a happy occasion -- Jamie's birthday party. And now he's gone. What's going on? What's happened in the months since Mark's death and Jamie's disappearance?

Everyday since Mark's death has been tough for Tess. She barely has the strength to get out of bed or take care of Jamie. Each day is struggle to get out the door and get Jamie to school on time. Jamie hasn't been the same, either. The sweet, happy boy Tess remembers has become quiet and moody. Something has to change before Tess and Jamie drown in their grief. Enter grief counselor Shelley. At first, Shelley is a welcome addition to the household; doing the ordinary, mundane tasks that are too much for Tess -- sorting mail, cooking, and cleaning. Shelley understands Tess's pain; she wants to help her new friend see there is light at the end of the tunnel.

It's hard for Tess to think about the future when the present is so hard. Her brother-in-law, Ian, is pressuring Tess to settle Mark's estate. Ian needs money and fast. He alleges Mark owed him money, but Tess is skeptical. To make matters worse, Tess is starting to have suspicions about Shelley. Why has this woman taken such an interest in Tess? Why does she cling so much to Tess? Doesn't Shelley have a life of her own to lead? And...what are Shelley's motives toward Jamie? Is Shelley the key to Jamie's disappearance?

I can't give anything away, but I will say that, for me, this book ended in an unexpected way. The clues are there, but if you get engrossed in the story, like I did, the clues can easily be overlooked. Each chapter has a cliffhanger-like quality to it, so I kept reading. I wanted to know what happened to Jamie? With each chapter, my theories were constantly changing? Did Tess harm Jamie? Did Ian harm Jamie? Did Shelley kidnap Jamie? Or is Jamie perfectly fine and Tess is just overreacting? There are many plausible theories and where this ends up was a bit shocking. The depiction of grief and loss was well done; Tess's highs and lows are vivid. One day Tess is looking forward to the simple things, like shopping or going to the beach. But the next day a photograph or memory of Mark can bringing her crashing back down. Overall, this suspenseful and engaging read.

Note: I received a copy of the book from the publisher (Berkley) in exchange for an honest review.
Posted by As I Turn the Pages at 12:01 AM