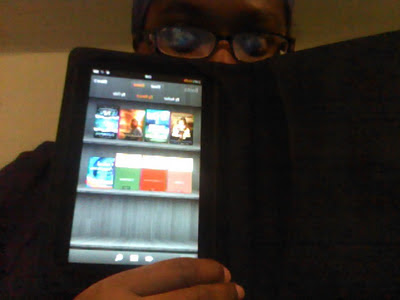 It took a while, but I'm finally delving into e-books. Like with most technology, I resisted until I couldn't anymore. I still love going to a book store and browsing the shelves. I like going to a store to discover new books. That's a feeling I can never replicate no matter how much I love having the Kindle Fire. Seriously, scrolling a digital screen with my index finger is rather boring. Perhaps that has to do with me being a little cheap. I refuse to buy an e-book that costs more than $4. Anymore than that, and I might as well buy the physical book. So far I've used it more to play Solitaire than to read.

But the overall goal is to read on it. The first book to get that honor is The Glass Case, a short story, by Kristin Hannah. What drew me to the Glass Case? The storyline perhaps? The author? No. I confess it was the $0.99 price tag. What about the story though? A frazzled mother frantically searches for her youngest son. April got pregnant at seventeen and soon married the father. Her mother had such high hopes. A hope that April would marry a successful man and have life outside of their small town. Instead April married young and wound up having three children. Her husband Ryan did become a successful district manager for Walmart. It might not be the success her mother dreamed of, but April is happy. She's happy until the day her youngest son Brad failed to come home from school.

OK, I'm going to spoil the ending for you. If you don't want to know STOP reading now.

OK then. It's a rather short story, so I don't think I'm spoiling too much. The story ends happily. How? I won't tell you, but the point to this post isn't about the happy ending to The Glass Case. The point is I found that I like reading on my Kindle. As long as I remember not to eat and read at the same time. I made the mistake of reading and eating at the same time. I left some rather greasy streaks on my screen. A little tissue later, and it's as good as new.

After reading my first book on the Kindle, I starting thinking  the younger generation has very little awareness of the joy of reading. These days kids come out of the womb with an iPhone. My little brother informed me that several of his classmates got a Kindle Fire for Christmas. But are any of them using it to actually read? According to little bro, the answer is no. The kiddies are using it to play games. While I like modern technology, I think reading was already a simple enough task.
Posted by As I Turn the Pages at 3:48 PM