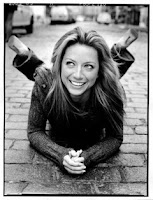 Q: As a former reporter and political aide, you share a lot of traits with Jules. How much did you model Jules after yourself?
A: The novel was definitely inspired by my professional experiences in both TV news and politics, but Jules, and the circumstances she finds herself in, was invented. I think many novelists would say that real life often serves as the raw material, which is then mixed with a healthy dose of imagination!

Q: In the book reporters have the power to tell the story as they see it. I was wondering if that is part of the reason you self-published?
A: My decision to self-publish was partly influenced by the fact that there were multiple "gatekeepers" - a literary agent, editors, etc. - who wanted to change the direction of the novel.
I had a vision for how the story was to unfold and I wanted to stay true to that. I'm grateful that I was at a point in my adult life where I had the self-confidence and courage to go my own way. I knew this book would find an audience and I am overwhelmed by just how much it is resonating with readers.

Q: Sept. 11 plays a powerful part of the book. Were you working then? Was it hard to include that?
A: I was working as a production assistant at WNBC 4, the NBC affiliate in New York City, on September 11, 2001. The scene in the novel was challenging to write but one I felt was important to include.  Everyone sees what happens in front of the TV news cameras when tragedy hits, but few have any idea of what happens on the other side. Hopefully, my experience of actually being there helped me to portray the events and the characters in an authentic way.

Q: What are you working on now?
A: I'm working on my next book - playing with the genre - not sure whether it will end up being memoir or fiction, but the story is developing.

Q: In three words how would you describe your book?
Self-discovery through love.
Posted by As I Turn the Pages at 12:15 AM