Why Write about Caffeine? 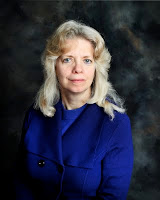 Greetings from . My name is Susan Lynn, and I recently released my debut memoir, Caffeine Makes Me Bleed: And How It Can Poison You, Too! Thank you, Jael, how kind of you to allow me to guest post at your website.
In the past, I consumed caffeinated products in almost every form available. To be honest, like most people, I followed that questionable routine for years and thought I was just fine. For awhile, even though I knew I suffered from the ill effects of caffeine and other illnesses that followed when I consumed caffeine, I thought that these maladies fell upon me and only me.
Eventually, after I became angry about my predicament and wanted to find out why it happened, I began researching the long-term effects of caffeine. I studied not just short-term effects you are familiar with like: racing heart, respiratory distress, and seizures, but what else happens to the human body. What I learned was startling. I realized that many other people were also made ill by consuming caffeine. When I learned that the medical world wasn’t even tracking many of these caffeine-related illnesses, I decided to write a book.
For instance, are you aware that the FDA does not require a product show its caffeine content on the label if the caffeine is a natural chemical found in the food item, like coffee beans or tea leaves? Also, did you know that caffeine comes from other sources and can be disguised by names like yerba mate, cocoa, guaraná, and kola nut? When these sources of caffeine are mixed in food products along with caffeine, as in energy drinks, that much caffeine can cause an overdose.
We are a caffeine nation. Researchers cannot agree, but somewhere close to 279,000,000 Americans consume caffeine each day in one form or another: colas, chocolate, tea, coffee, energy drinks. Manufacturers sneak caffeine into other products, too. Journalists predict that energy drink manufacturers, for example, will sell about $9,000,000,000—yes, that’s right—9 billion with a b—dollars’ worth of energy drinks this year. That’s a lot of caffeine! And when it comes to these energy drinks, experts seem to be saying they do not know the exact long-term health effects of consumption on consumers.
It appears that to be deterred from using caffeinated products, people expect to be struck by lightning upon consumption, and when that does not occur, they believe they are safe from the effects of caffeine.
If you read a negative fact about a product that presents a potential hazard to your health, you immediately make a decision as to whether you want to risk consuming that product again. Negative facts about caffeine are usually listed only a few at a time. There are many negative facts and illnesses that are seriously linked with caffeine consumption, but instead of focusing on one or two effects of caffeine, we should take all of caffeine’s bad effects into consideration at once.
Whether it is you or someone you know or love who consumes caffeine, it is important to sort out the good information from the bad so you can avoid suffering from the same deteriorating health as me. So far, there is no cure.
I hope that each of you find time to log on to my website at:  http://www.caffeinemakesmebleed.com where you can read my blog, and find more details about Caffeine Makes Me Bleed.
Always pursue great health. 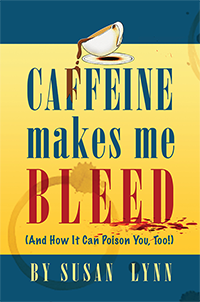 Susan Lynn, who lives in Ohio, has an A.A. in paralegal studies and a B.S. in business administration. She works as a contract administrator and has also worked as an executive assistant, temp, -COM coordinator, EEO Officer, stay-at-home mom, and a safety director. An active organic gardener since 1974, Susan loves to read biographies, memoirs, and humor books.