My take on: The Daughter

Two successful parents, both of them doctors. Three beautiful children, one girl and twin boys, all of whom are seemingly happy and healthy teenagers. On the surface everything looks great. But a disappearance, quite possibly a kidnapping and murder, shatter that perfect image. It will leave one woman questioning everything and everyone in her life.

The Daughter by Jane Shemilt is a novel of secrets. Family secrets. Secrets that will ultimately destroy a family.

Jenny thinks everything in her family is just fine. She and her husband, Ted, both work a lot. But the kids don't notice right? They're both home in time for dinner and are both there in the morning for breakfast. So what if Jenny and Ted both disappear into their own worlds when they get home. They both take the time to ask the kids questions about their activities. Naomi, their 15-year-old daughter, is prepping for a part in the school play. Their sons, Theo and Ed, are equally occupied with school activities. Jenny and Ted seem to have the perfect family........that is until Naomi disappears.

As the days, weeks, months, and eventually a year pass, Jenny learns about the daughter she thought she knew. The signs were there, but Jenny just chose to let them go. The faint scent of smoke on Naomi came from someone else. The scent of alcohol on her breath is because Naomi was celebrating opening night. The coat Naomi was wearing wasn't to cover up a racy outfit, it was because it was cold. The high heels she's wearing is because Naomi is experimenting with fashion. There's an explanation for everything. But how does Jenny explain Naomi's pregnancy? The secret boyfriends? The cryptic messages in Naomi's diary? And lets not forget Ted! He has his own secrets. Secrets that Jenny chooses to be blind to.

The book alternates between the past and the present. With each chapter the book gets closer and closer to what happened to Naomi. Each day Naomi is missing, sends Jenny deeper and deeper into despair. That despair exposes her children's true feelings. Before and after Naomi disappeared, Jenny would find solace in her drawings and paintings. She saw those moments as therapeutic and as an escape, her kids saw them as rejection. Ed didn't feel Naomi was nurturing, Whenever he was sick, she thrust a bottle of pills at him. Rather than acknowledge Ted's infidelities, Jenny makes excuses for him. Rather than discuss Naomi's disappearance, Jenny would rather treat Theo and Ed as they though they were kids.

At its core, this book is about the destruction of a family. The family was already falling apart before Naomi's disappearance. Her disappearance was the straw that broke the camel's back. The family could no longer be in denial. So what did happen to Naomi? I'm not exactly sure. The ending felt a little ambiguous and that's what kept me from absolutely loving this book. I want an ending that gives me clarity. Despite my feelings about the ending, this was a solid debut novel by Jane Shemilt and I would read another book by her.

Note: I received a copy of the book from the publisher (HarperCollins) in exchange for an honest review. The Daughter is one of the spring picks for She Reads.
Posted by As I Turn the Pages at 1:30 PM No comments:

My take on: The Secret Life of Violet Grant

Sounds intriguing doesn't it! The Secret Life of Violet Grant by Beatriz Williams is compulsively readable.

Let's set the scene. Manhattan. 1964. The young Vivian Schuyler does the opposite of what her wealthy family expects from her. What? She's working ... for a living! Rather than trying to snag a wealthy husband and living out her days as a socialite, Vivian is working at a high-profile magazine. She's just a fact-checker, but she aspires to be a writer. She's looking for her big break -- a story that will skyrocket her career. Little does she know that big story lies within her own family.

The mysterious trunk reveals the past of Violet Schuyler Grant, Vivian's aunt and the black sheep of the Schuyler family. Vivian's story starts in 1912, just before the height of World War I. In many ways, Violet was just like Vivian. Violet went to college, she wanted a career, and wanted to prove that she's just as intelligent as any man. Violet went to Europe, eventually studying physics at Oxford. She was on the right path, but ultimately it was a man, her husband Dr. Walter Grant, who damaged her physically and emotionally. Walter does everything he can to control Violet's life, all under the guise of his love for her. He decides when they go out and where. He decides when Violet can come around him. He decides when they have sex and how they have sex. He makes decisions for her reproductive health, not matter the cost to Vivian's emotional health.

Initially, Violet doesn't know any better. Walter is a man of stature. How can she rebel against him? When she finally gets that wakeup call, it's VERY eye-opening. Lets just say she catches Walter in a compromising position. Walter, being the scumbag that he is, doesn't even flinch when he's caught. But it awakens Violet. She starts thinking and acting differently, which ties back to the whole premise of this book. Who is Violet Grant? And.......did she murder her husband and run off with her lover? The answers could be in that trunk.

The book alternates between Vivian and Violet's perspective. Each woman's story was compelling. Although, I was drawn more to Violet's story. Vivian had a more modern approach to life and she had more choices. Would Violet have been a different person if she came of age in 1964 as opposed to 1912? Maybe. In some spots, the book felt like a thriller. I'm gobbling up each page trying to get to the next. Each chapter reveals another layer to each woman's story. This book kept me guessing and I would definitely read another book by Beatriz Williams!

Note: I received a copy of the book from the publisher (Berkley) as part of a blog tour.
Posted by As I Turn the Pages at 12:01 AM 4 comments:

My take on: Miss and the Rosa Parks League 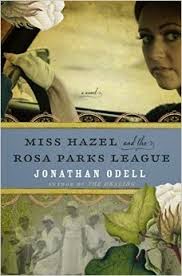 I'm finally done with grad school (pending my grade)! After several months spent fretting over that project it's finally done. I can dive back into all the TV I missed ....... and all of the books I put to the side!

I started Miss Hazel and the Rosa Parks League by Jonathan Odell way back in late December. It took me until yesterday to finish. That's not because it was a bad or difficult book, it's because I was busy .... and I'm such a moody reader. I picked this up, put it down for weeks, picked it back up, finished other books, picked it back up, and put it down for weeks. It was a never-ending cycle until I finally decided it's time to finish.

This is a story set during the pre-Civil rights era in Delphi, Mississippi. Fate draws two women, Vida and Hazel, together. They have more in common than they would like to admit. To Vida, Hazel is a crazy, alcoholic, white woman who is throwing her life away. To Hazel, Vida is the crazy black woman who is paid by her husband, Floyd, to babysit her and her son, Johnny. Neither woman realizes how much pain the other has gone through.

Vida is mourning the loss of her son Nate. Vida's son paid the ultimate sacrifice -- his life -- all due to his father's ignorance and hatred. Vida was raped by the corrupt town sheriff, Billy Dean Brister, who also happens to be white. When he learns that Nate is his son, Billy Dean shot him rather than letting the whole town know he fathered a black child. Levi, the town's unofficial preacher and also Vida's father, tries to teach her that some good will come from all her pain. But when?

Hazel is also mourning the loss of her other son Davie. His death sent Hazel into a deep tailspin. She's spent her entire marriage to Floyd trying to fight in with the upper crust of society. But no one wants to let her into their circle. As Hazel drowns in alcohol, she can't see the damage it's doing to herself and her family. The only time Hazel truly feels free of her problems is behind the wheel. She can hit the open road and just lose herself in the beautiful scenery. But her freedom, literally and figuratively, is taken away after Davie's death. Rather than truly help his wife, Floyd lets her slowly vegetate. He hires Vida to "look" after Hazel a.k.a. shove pills down Hazel's throat.

Neither woman knows how to deal with their pain. How do they move? How can they move on? Johnny is the answer. Whether he meant to or not, he awakens both women. First his mother by convincing her that Vida is plotting against the family. But Vida is wise to their shenanigans. Slowly, both women forge an unlikely friendship that changes not just them, but the entire town. A suspicious disappearance turns race relations upside down. Perhaps Vida and Hazel, with a little help from some new friends, can fix everything.

At its core, this book is about Hazel and Vida's friendship. In the beginning, neither woman truly understood the struggles of the other. Hazel was often ignorant to the privileges she had as a white woman. Despite what others think about her drinking, Hazel can do things that Vida can't. In contrast, it took time for Vida to realize that Hazel isn't the enemy just because she's white. At 400+ pages, I often wondered where this book was going. Sometimes, I'm just so gung-ho for a fast-paced book. I was waiting for a big reveal, but it wasn't necessary there. This book was just right and well worth taking the time to read. I just had to go with the flow.

Note: I received a copy of the book in exchange for an honest review.
Posted by As I Turn the Pages at 10:14 PM No comments: