My take on: The Edge of Lost 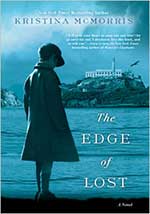 The Edge of Lost by Kristina McMorris, starts with such a big tease! The book opens in 1937, on Alcatraz island. A little girl has gone missing. And........then the book flashes back 1919!!

Again, what a tease! No big hint of how this will relate to the rest of the story. But because I've heard nothing but good things about Kristina McMorris' writing, I trusted that I was in for a great read. And...I was!

In 1919 Ireland, we meet a young boy named Shan. His mother has died. He doesn't know much about his father, leaving Shan to be "raised" by the unscrupulous Uncle Will. I say "raised" because Uncle Will makes Shan earn his keep by performing in seedy pubs. It's not that Shan doesn't like singing/performing, he dreams of making a career out of it. He also dreams of meeting his father. After learning that his father is a soldier in America, leaving Ireland is all Shan can think about. Uncle Will actually gets on board with making the trip. I don't think I'm spoiling much by saying that Uncle Will dies on the ship as they head to New York. It happens very early in the book, forcing Shan to think quickly. How will he get off the ship without Uncle Will? How can he get through customs without Uncle Will? More importantly, how will he ever find his father?

Lucky for Shan he made friends on the boat with Nick Capello. Nick's parents pretend that Shan is their son Tommy, the only hitch is that the real Tommy is dead. While they get through customs, what will happen after? Is it fair to the Capellos for Shan to continue pretending to be a member of the family, especially a dead one. That question gets answered quickly. Mr. and Mrs. Capello, their daughter, Lina, and Nick grow to love Shan. The search for Shan's biological father fades away. The Capello family is at the heart of this story. They are a family that anyone can relate to. Nick fights his father's authority, choosing instead to embrace the lifestyle of a small-time gangster during the height of Prohibition. Shan and Lina choose not to fight their father's authority. They choose to follow the rules, they choose to go to school, they choose to work hard and in the right way. Rather than disappoint his father, it's easier for Nick to be away from the family. A family blowup, leads to long-buried feelings. Shan chooses to do exactly what Nick did, separating himself from the family. But he's pulled back, an action that has a devastating impact on the rest of his life.

Shan is the character I connected to the most. Despite the Capellos welcoming him to the family, deep down Shan always wonders if he's a true member of the family. He believes he has to work extra hard to remain a part of the family. He really doesn't but Shan doesn't realize that. Overall, I love, love, loved this book. I'm a big lover of historical fiction. Now, I have to read the rest of Kristina McMorris' backlist.

Note: I received a copy of the book from the publisher (Kensington). The Edge of Lost is one of the winter selections for She Reads.
Posted by As I Turn the Pages at 7:54 PM No comments:

My take on: Ginny Gall

"He shuddered.  The wind was cold. It tasted of unvisited streams and rock. He wondered again how it had been for his mother making her way in the dark over the mountains. Had she forgotten him? He couldn't sense her out there in the wilderness, but he believed she was there. But where was he? And what was he, standing at the end of a leafy alley in Chattanooga, Tennessee? His hands were still attached, his face uncut, his side unburnt. But for how long? How easy it was to step off into ruin." Pg. 68

Ginny Gall by Charlie Smith is a layered portrait of an African-American young man growing up in the Jim Crow south. Delvin Walker's mother is on the run from the law. Accused of murder, Delvin's mother is not coming back. He and his siblings are left to fend for themselves.

Delvin comes of age as an apprentice for a local funeral home director, Cornelius Oliver. At the funeral home, Mr. Oliver indulges Delvin's love of reading. He even awakens Delvin's deep sense of compassion. The violent death of a young man brings Delvin's unresolved emotions about his mother to the surface. This young man was beaten and burned to death for allegedly stealing from a white woman. His death had eerie parallels to the real-life murder of Emmett Till, a young black boy killed for allegedly whistling at a white woman. In Ginny Gall, Delvin realizes he is not that far removed from a beaten and burned black boy in a casket at Mr. Oliver's funeral home. Who is Delvin really? If not for Mr. Oliver's influence, how easy would it be for Delvin to go in the wrong direction? What does the future hold for Delvin? Is his future at the funeral home or is it somewhere else?

It is somewhere else. An incident (if you want to know what read the book) forces Delvin to hit the road. Riding the trains, Delvin sees the world from a different perspective. He's no longer a teenage boy with responsibility. He's a free spirit, learning to survive in a world that is not kind to young black men. He experiences a lot of physical and emotional pain.

I had a hard time with this book. Sometimes I wasn't sure if liked this book or not. I think the author does a good job of highlighting the brutality of racism...but it takes sooooooo long to get there. Smith's prose is very poetic but it's also very detailed. He uses 50 words when 30 will do. Sometimes it was just too much. Sometimes less is more. Overall, I think this was good book that got bogged down with too much detail.

My take on: Noah's Wife

A minister and her wife arrive in a dreary, wet, gray town. It rains all day and all night. It has rained for as long as anyone can remember. The people in this community are very tight-knit. The community is resistant to change -- and to newcomers. But as the rains increase, and the rivers rise this town will have to change. Their lives depend on it.

Noah's Wife by Lindsay Starck is a modern-day take on Noah's Ark.

From beginning to end, I wasn't sure what to make of this book. I liked the writing. I liked the characters. When I was finished, I was left with "what does this all mean?" I'm not overtly religious. I was worried about that going into this book.

Was this going to be a book preaching about the virtues of religion?

It's not a preachy book. This is a story about people. About the people they love. About the choices they make. About the consequences. About the future. These are themes that everyone can relate to.

Noah has been assigned to this town after the previous minister died under mysterious circumstances. Noah believes he can help this town. He believes he can help restore the town's faith in God and in each other. Noah's Wife want to help her husband. All she has to do is be supportive and make friends. But both of them were drowning before they arrived in this town. Noah's faith in himself and in God is waning. Noah's Wife has lost herself in her marriage.

The townspeople are equally in turmoil. Mrs. McGinn is the town matriarch. People come to her for help, but she has trouble solving problems within her own family. Mrs. McGinn's daughter, Angela Rose, wants out of this town. Her fiance, the zookeeper, wants to stay. But both of them have trouble expressing their feelings. The zookeeper loves Mrs. McGinn's daughter, but he also loves taking care of the animals at the local zoo. Who would take care of the animals if he wasn't there? Mrs. McGinn's daughter doesn't understand that desire to help others. She only understands her desire to leave this town. Mauro, the local shopkeeper, has literally lost his life savings to this town. That money was going to be his way out. Where will his motivation to go on come from?

With the ever increasing water in the town, the animals are forced out of the zoo and into the homes of everyone in town. Snakes, peacocks, penguins, alligators, zebras, and more flood the community. The weatherman, who is an outsider, tries to warn the town of the increasing danger. The weatherman tries to get them to leave before they all die. But if they try to leave, it will force the town to face their problems. No one wants to face their problems in this town.

The ending is a bit open-ended, but I can't see the book ending any other way. There's hope for the town, but things could easily go the other way. But if there is something that bugged me about this book, it's the names. Why couldn't Noah's Wife get a name? I wasn't referring to her that way by accident. Unless I missed it, Noah's Wife never got an actual name. Otherwise, this is a book that I would recommend and an author I would read again.

Note: I received a copy of the book from the publisher (Penguin) in exchange for an honest review.
Posted by As I Turn the Pages at 2:22 PM 1 comment: