The Martian: The book vs. the movie

Why am I saying this?

Because I don't know how to talk about both without some spoilers. Sooooooooooo if you haven't read the book or seen the movie, I suggest you come back later.

Here comes a really big picture of the book, just in case. 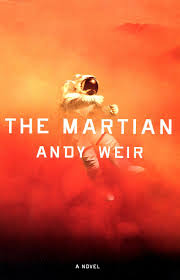 Still here? Ok, lets dive in. I think most people know the basic story. After a disastrous sandstorm, the Ares 3 crew must abort their mission on Mars. In the race to get to the ship and off the surface of Mars, astronaut Mark Watney is hit by flying debris and presumed dead. Commander Lewis doesn't want to leave Mars without Watney, but has to make the difficult decision to do so. The Ares 3 crew lifts off the surface of Mars and heads back to Hermes, the ship that will take them back to Earth.

Of course Watney isn't dead. Just knocked out. He's left to fend for himself. The communications equipment is damaged, how will he contact Mission Control? How can he stretch his food to last until the next Ares crew comes in four years? How long before he loses his mind listening to Commander Lewis' endless supply of disco music? That last one is source of comic relief throughout the book and the movie.

I don't normally read science fiction, but I jumped on the bandwagon after reading so many good reviews. I have to say this is one of the funniest books I've read in a long time.

Use your imagination on that last word.

There is a lot to like about this book. The fighting and funny banter at Mission Control as they try to work out a plan to save Watney. Commander Lewis getting over her guilt about leaving Watney behind. But.....this does read like a first book. Andy Weir self-published this book before signing a deal with Crown (an imprint at Penguin Random House). This could have used just a little bit more editing. The prose is very straightforward, but it's also awkward at times. It's very heavy on the science. I appreciate Andy Weir's need to be authentic, but it got a little boring at times.

Which now brings me to the movie. I LOVED the movie. Probably a little bit more than I liked the book. It's not as heavy on the science, the balance was just right. Occasionally, Matt Damon annoys me with his politics but I think he was the perfect choice to play Mark Watney. He portrayed Mark with the right amount of dry humor and vulnerability. The movie is pretty faithful to the book. Some of the lines are straight from the book. There are some slight tweaks to the movie. After regaining contact with Mission Control, Mark never loses it. Which is weird to me because that was a major plot point in the latter half of the book. Mark's trip to the Ares 4 ascent vehicle is drama-free, no sandstorm to avoid, no craters, no overturning of the rover. Commander Lewis takes control of Watney's rescue at the end. I won't tell you how, but if you've read the book you know what I mean. Overall, this is a book worth reading and a movie worth watching.