My take on: Cinder 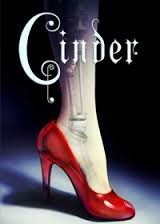 According to my Goodreads account, I started Cinder by Marissa Meyer on December 6th and I finished it today. Yes it took me seven months to finish this book. But I did finish several other books in that same timespan. So what gives with this one? I don't know. Perhaps I need to stop reading so many books at once, which will be a hard habit to break.

I'm not sure what I can say that hasn't been said. Cinder, the first book in The Lunar Chronicles, came out more than four years ago.

The premise for this retelling of Cinderella is an interesting one. Cinderella is now Cinder, a cyborg. She's part-human, part-metal scrap heap. Some of her limbs appear very human, but others look like a machine. She lives in the distant future of New Beijing, formerly China, with her wicked stepmother, Adri, and her step-sisters, Pearl and Peony. But only Pearl and Adri are wicked. Peony treats Cinder like a part of the family, but Adri and Pearl see her as nothing but a servant. Cinder has made a name for herself as a top mechanic. But not everyone knows that Cinder is a cyborg. Not even Prince Kai.

The handsome prince seeks Cinder's expertise in fixing his beloved android. Cinder is somewhat smitten with Kai. The feeling turns out to be mutual. But Cinder knows nothing can come of it. What does a prince want with a cyborg. Cinder believes Kai would reject her if he knew the truth. Cinder barely understands how she got like this. She wasn't born made of metal. Someone did this to her. The hows and whys are a mystery to Cinder. How can someone like Kai love and understand her when Cinder barely knows her true self?

New Beijing is a city in turmoil. A deadly virus is spreading throughout the population, taking the life of the Emperor, Kai's father. Kai is next in line to the throne. The entire world is on the brink of war with their rivals on the moon. Earth's enemies on the moon, also called Lunars, are led by the evil Queen Levana. A marriage alliance between Kai and the Queen might be the only way to save humanity. Kai is against any such alliance, not just because he is repulsed by the evil queen. But because he believes there has to be a better solution....and because he has feelings for Cinder.

My main gripe with this book....there is no ending. The "ending" is really a tease, it's meant to make readers continue reading the series. I wasn't totally gaga over this book. I feel like it's a nice start. But I want to know more about Cinder. It's not completely clear how and why she is a cyborg. There's an explanation given, but it felt a little convoluted. I like that Cinder is way more kickass than the original Cinderella. She will fight, literally, for what she believes in. Kai was a bit of a wimp in my opinion. How that relationship will work out remains to be seen.

This series has been on my TBR for a long time. I own all four books. I want to finish the rest of the series by the end of the year. But at the pace I'm reading it might not happen!

Rating: Give it a try
Posted by As I Turn the Pages at 9:08 PM No comments:

Where have I been???

...Well I have been on vacation. Lots of time spent on the beach in Tobago. I brought books along for the trip.....but I didn't finish any. I definitely read on the trip, just not as much as I thought I would. 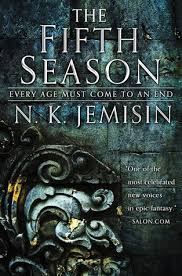 Historically, I'm a slow reader. When pushed, I can read a book in a couple of days. But since I like to read several books at once, it can take some time for me to finish. Or....in the case of The Fifth Season by N.K. Jemisin, it can take me months before I finally decide to throw in the towel.

Part of my resolution for the New Year was to read more sci-fi/fantasy books. The Fifth Season was first on my list.

Here is the description from Amazon.com:

A season of endings has begun.

It starts with the great red rift across the heart of the world's sole continent, spewing ash that blots out the sun.

It starts with death, with a murdered son and a missing daughter.

It starts with betrayal, and long dormant wounds rising up to fester.

This is the Stillness, a land long familiar with catastrophe, where the power of the earth is wielded as a weapon. And where there is no mercy.

Sounds interesting. I wanted to like this. I heard N.K. Jemisin speak at a book event. She was very engaging. I saw a lot of praise online for The Fifth Season. I thought this would be the perfect opportunity to break the mental block I have against sci-fi/fantasy books. Well.....I will have to try again.

Fifty pages in I wanted to give up. This is written in the third person. I found it hard to follow. Every other page, I had to look up words in the appendix because I had no idea what Jemisin was talking about. But I kept going. I kept waiting for the big moment. The big moment when the book would make sense. 100 pages in. 150 pages in. Finally, after a little more than 200 pages I had to give up. I rarely give up on books. For me, this book was work. Reading a book shouldn't feel like work. I had to let it go.

The Fifth Season has not soured my opinion of sci-fi/fantasy books or N.K. Jemisin. This one just wasn't my cup of tea. I'm trying again with A Game of Thrones. Since my family is such big fans of the TV series, I thought I would finally give the books a try. Why not watch the series instead? Because I totally believe in reading the books first!!
Posted by As I Turn the Pages at 9:52 PM No comments: