My take on: The Summer of Me

With her kids away for the summer, Destiny, a single mother, finally has some time for herself. Destiny is used to doing so much for other people. Making herself a priority is never at the top of the list. But if she's ever going to make a better life for herself and her kids, there's no time like the present.

The Summer of Me by Angela Benson is a story many people can relate to. It's a story of love, motherhood, family, and friendship.

A summer without her kids will be difficult for Destiny. Since they were born, Destiny has never gone more than a couple of days without seeing her kids. Now she will have to navigate several months without them. Her twins, KJ and Kenae, are spending the summer with their father, Kenneth, and stepmother, Mary Margaret in California. It's hard to admit, but Destiny is jealous of the budding relationship Mary Margaret has with her kids. But Destiny tries her best to put those feelings aside for the sake of her kids.

While the kids are away, everyone in Destiny's life has an idea on how she should fill her time. Her friends think it's time for romance. Her mother thinks Destiny should find a better job. Destiny dropped out of college years ago, much to the disappointment of her mother. But what does Destiny want? She wants to move her little family closer to KJ and Kenae's school. If she moves closer to their school, Kenneth may stop asking for the kids to live with him. But Destiny can't afford to move unless she can earn some extra income, her salary from Marshall's isn't going to cut it. What should she do? Maybe Destiny can do it all?

Destiny does manage to do it all. Her friend Natalie sets Destiny up with Daniel, a new pastor in town. Her friend Bertice helps Natalie find part time work. She enrolls in college, and gets the opportunity to be mentored by very special woman. Everything is working out for Destiny. Or....maybe not? Daniel is keeping a big secret from Destiny, but it's for her own good. Her new part-time job might not be entirely legal. Her new mentor has a deeper connection to Destiny than she could ever imagine. But life is full of challenges, and Destiny faces them head on.

Overall, the book has a very uplifting and inspirational message. There are a lot of spiritual overtones, which I'm not against....but I thought the approach was very heavy-handed. There were also too many plots going on for my tastes. Near the end of the book, Destiny and some of her friends are facing some serious legal trouble but everything works out in the end. Their legal troubles work out too easily. All the plots get wrapped up in a neat little bow, some of which were borderline implausible. I wanted to like this book. It had all of the elements I usually go for, family, love, and friendship. But this book was just missing something for me. The book was not all bad, but it just wasn't for me.

My take on: Fast Food Maniac 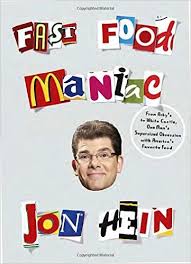 Fair warning, DO NOT read Fast Food Maniac by Jon Hein on an empty stomach. If you read this while you're hungry, you will be seriously craving every type of junk food under the sun. There is no shortage of variety, from tacos, burgers, pizza, milkshakes, fried fish, cinnamon rolls, and my personal favorite......Nathan's french fries. 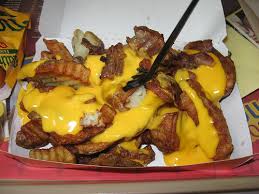 Yes. Nathan's french fries with cheese are a personal favorite of mine. Fortunately, I haven't had those fries in more than a year. Instead, I was able to live vicariously through Jon Hein's book.

Fast Food Maniac is not deep literature. It's more like a how-to guide on the best fast food across the nation. Hein lays out how some of the most famous chains, including McDonald's, Dunkin Donuts, Hardees, Papa Johns, and more, got their start, their catchphrases, mascots, and secret menus. I didn't know McDonald's had a Pie McFlurry on it's secret menu. Starbucks has at least 10 "secret items." A LOT of real estate in this book is dedicated to the best burger joints in the nation. Beef heaven might appeal to most people, but it doesn't to me. I haven't eaten beef in nearly 13 years, so I had so many deep eye rolls every time ANOTHER burger joint was highlighted.

Overall, this wasn't a bad book. But it was lacking in depth. The book reads more like junk food for dummies. The author loves junk food, but, in my opinion, I don't think there were enough anecdotes detailing his personal connection. But if I ever take a junk food tour of the U.S., I think this is the book I would take with me.

Note: I received a copy of the book as part of Penguin RandomHouse's Blogging for Books in exchange for an honest review.
Posted by As I Turn the Pages at 6:12 PM No comments: