It's been awhile! Life at the beginning of March was VERY different. For starters, I was still going to work everyday. Then, by the second week of March I started working from home -- which has been challenging and at times frustrating. My internet connection drops frequently, large files slow my computer, and. . .I don't have that separation between work and home. In the "before" times, when I left the office I left work at work. Now that I'm working from home, it's hard to maintain those boundaries.

But now I have a little break from work, I've been furloughed for two weeks. Considering the current climate, I know how fortunate I am to still have a job.

For these two weeks, I had grand visions of doing lots of reading and working on a jigsaw puzzle. However, it's just as hard to find a jigsaw puzzle as it is to get toilet paper! In-store, the shelves where puzzles would normally be are COMPLETELY EMPTY. Online it's just as bad, Amazon is sold-out, BN.com is sold-out (of the good 1,000 piece puzzles), and if you try to buy direct from the manufacturer it could take until June to receive one. So for now I'm going to focus on reading. 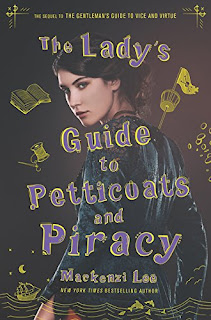 Reading-wise, I hope April will be better than March. I only finished one book in March, The Lady's Guide to Petticoats and Piracy by Mackenzi Lee. When March began, I was distracted by the news. Consuming every bit of news and it was depressing -- so much that I didn't feel like reading. I had to put a stop to that. Now, I only watch the news once a day. It's refreshing to not watch the news all the time. :)

So let's talk about the one book I read in March. The Lady's Guide to Petticoats and Piracy is the sequel to The Gentleman's Guide to Vice and Virtue. Well. . .this was a big letdown. The first book was refreshing, lighthearted fun.  Henry "Monty" Montague took center stage in book one, and he was a crass, fun, emotional, and engaging character. He wasn't afraid to be himself, including loving another man. In the second book, Monty's sister, Felicity, is the main focus. I wanted to like the second book, but I felt like absolutely nothing happened. Four hundred-plus pages and I was bored.

So here's looking to April! Happy reading!
Posted by As I Turn the Pages at 10:40 AM No comments: