It was fate. I saw a review of Jodi Picoult's latest book, Sing You Home, on Tuesday. Later that day, I went to her web site to take a look at her tour dates. NYC had to be a stop right? Yes. Two in fact. Just one problem, the dates conflicted with some family obligations. At least I assumed they did, but I found out I was wrong (which rarely happens I'm always right!!). So Thursday afternoon I made my way to Barnes and Noble in Union Square, which by the way is a lovely store. I don't live in Manhattan, but I might have to trek to Union Square more often.

I got there shortly after five. I thought I was too early, boy was I wrong. People where already marking their territory in that insanely hot room. I peeled my sweater, coat and scarf off quickly. Just a tip Barnes and Noble, a room that you expect to be filled to capacity shouldn't feel like a sauna!! The long line at the cafe, just for a bottle of water didn't help. But eventually I cooled off and started reading Sing You Home. I'm only 65 pages in, and I'm already hooked. My review pile is a little on the thick side, but I think I have some room for Sing You Home.

This was my first book signing, and I had a great time. The event came complete with music, sung by Jodi Picoult's good friend Ellen Wilber. The lyrics were written by Jodi, and having read the first few chapters it's a nice compliment to the book.

Listen to me wax poetic on my Jodi Picoult collection....(excuse the hat, but it's a bad hair day!!)

I even have a few pictures. I probably should have sat closer, but I was happy just to be there. 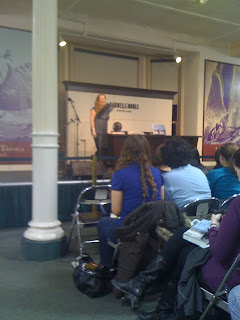 Jodi Picoult after entering the room to loud applause!! 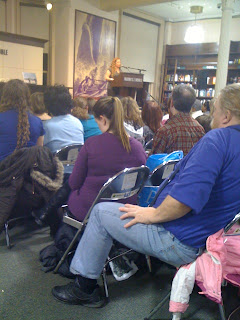 Jodi Picoult reading from Sing You Home, which was very engaging!! 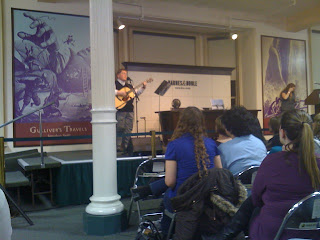 Ellen Wilber singing﻿
Posted by As I Turn the Pages at 8:34 PM