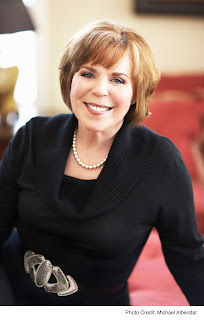 Q: Do you ever find that it’s emotionally difficult to write some scenes or characters? What about the scene in Hidden Summit when Brie revisits her painful past to explain her place in Virgin River to Conner?

A: Harder than Brie remembering her sexual assault was actually writing it in Whispering Rock, the third book in the series. All such deeply emotional scenes are hard and yes, they make me cry. In A Virgin River Christmas there are a couple of them—the heroine remembering her last hours with her disabled marine husband and saying goodbye to the only man after him she could ever love. In Hidden Summit, Conner’s grief and anger at losing everything that mattered and resolving to be alone forever to avoid the hurt of being abandoned. And in Redwood Bend, Dylan’s feeling that he had bad relationship DNA and was a risk, no matter how much love he felt. But wait—because in Sunrise Point, Nora Crane has had a hard life, but is determined to get back on her feet for the sake of her baby daughters. She tore my heart out—she is so determined, so sincere, and she’s made several deals with God—never to lie, never to trust another man, always to be an excellent mother even though she certainly didn’t get any training from her own mother. She’s a lesson that we can do whatever we have to do, no matter how hard, as long as it’s the right thing to do.

The answer is yes, they make me cry. It’s not always a comfortable feeling, but I welcome it just the same. I shouldn’t be trying to write books that make you feel if they don’t make me feel. I don’t write books that don’t keep me awake at night—not if I hope to keep you up late reading.

Q: Do you find it's harder to write the male or female characters, and why? Unlike many romances, the men in your books feel as multi-dimensional as the women. Conner from Hidden Summit is a very strong male lead and Dylan from the forthcoming Redwood Bend is so much more than a former movie star heartthrob. How do you manage to make everyone seem so real?

A: They’re all hard, and a complete joy to investigate, study and develop. I imagine them. I think about them constantly. I create the ideal man or woman in my mind—stronger and better than me, absolutely. Admirable. People with flaws they desperately want to overcome, with desires they can’t quite figure out how to satisfy. In fact, sometimes they are so much smarter than I am, I can’t figure out how to get them out of their problems and off to happily ever after. We tussle. I wrestle them to the ground and try to hold them still until I can figure out what they want, what they need. And nothing, nothing is more satisfying than creating a whole, imaginary person that can speak to a reader, possibly serve as a role model for a reader who has had similar challenges and has been looking for her own answers. For HIS own answers—because many men write to me as well. After Paradise Valley was published I received dozens of emails from men who were amputees—and they were very positive letters. That’s what I live for—an endorsement from a real person!

Q: What’s the most interesting comment you’ve ever gotten from a reader?

A: Oh, you can’t print it! My readers never get my titles right—they write and ask me if I’m going to write any more of those “Virginia River” books. Or they want to know where Virgin River really is—they plan to move there and get a big, studly marine. But the funniest one ever was probably a typo: “Are you going to write anymore of those ‘Vagina River’ books.” Typo or Freudian slip.

I did get an email from a reader who was furious about my bigotry against Cubans. I was stunned and confused—I’d never written about Cubans. I suggested she had me mixed up with someone else. She wrote back with the direct quote, complete with page numbers—something about Jack being unable to shower off the stench of stinky Cubans. It was cigars! Cuban cigars! I pointed that out to her, but she was absolutely determined I had been bigoted in my remarks.

On a more serious side, a man who lost a leg in the war wrote me that he was changed by Paradise Valley, the story in which Rick Sudder lost a leg in the war and came home a messed up kid. My reader said that he realized from the book that he was an ass, thought it was a miracle his wife stayed with him through it, and finally understood how badly he needed counseling, which he was going to accomplish. I wrote back and asked him how he came across the book and he said his sister gave it to him—and his sainted wife was most grateful! Bless his heart!!
Posted by As I Turn the Pages at 5:00 AM