I didn't know it was possible, but I think Heart Like Mine has surpassed Outside the Lines as my favorite book by Amy Hatvany. She is extremely adept at tapping into the complex nature of families. Heart Like Mine is no exception.

Grace McAllister never wanted children, but everything changed when she met Victor Hansen, a handsome restaurant owner and divorced father of two. Victor is everything Grace has ever wanted. He makes her laugh. He's attentive. He doesn't want anymore children, which is a big plus in Grace's book. She could see herself having a future with Victor. His children, 13-year-old Ava and seven-year-old Max, live with their mother Kelli and are only around Victor on weekends. She can do this. She can be a stepmother, albeit an evil stepmother in the eyes of Ava and Kelli. Max is always sweet to her, while Ava is full of teenage angst and resentment. But, Grace can do this. The kids are only around on weekends, she can put up with the rude comments and looks. The kids are only a slight blip in her long-term goals. She doesn't have to be a mother. The kids have a mother.

Of course there's a twist here, otherwise there would be no point to the book. Kelli dies suddenly, leaving Victor and Grace to pick up the pieces. How did she die? Amy Hatvany's writing certainly hints at suicide. Growing up with strict and unloving parents, Kelli always felt alone. She was always looking for love. She always needed someone to love her and pay attention to her. There was a hole in her heart, one that not even Victor or her kids could fill. A long-buried secret comes to the surface just before her death. But is it possible Victor's engagement to Grace, sent her over the edge? Reading the book, I wasn't so sure of that. The book alternates between Grace, Ava, and Kelli's point of view. Each chapter that Kelli narrates reveals a little more about her past. Initially, Kelli comes off as the bitter ex-wife. But as the book progress, I just felt so sorry for her. She's one of those characters that you just want to give a hug. You want to tell her that it's going to be ok. Kelli was never able to pull herself out of that hole before she died. It was just so sad.

Kelli's death was so abrupt. Grace and Victor don't understand why she died. The kids don't understand why she died. Her death left everyone in a position they were unprepared for. Victor was used to Kelli handling everything. Now, he has to get into the parenting routine. It's no longer taking them to his house on the weekends and dropping them off at Kelli's afterward. He has to get them to school. He has to help with homework. He has to shuffle them to after-school activities. It was so much easier when all of this was Kelli's problem. But now, the kids aren't just his responsibility. Ava and Max are also Grace's responsibility. Victor says he will take on much of the burden, but even he can't do it all. When a crisis at work takes up all of his time, Grace is thrust into the role of co-parent. A role she didn't want. Can she handle it? Ava and Max both act out, but that's to be expected after losing a parent. After some time has passed they should snap right out of it. Right? Max is so much easier to handle, and he will also have his dad to teach him how to be a man as he grows up. But what about Ava? She was so close to her mother. Will Ava want or even be receptive to any type of guidance from Grace?

The road ahead is very bumpy for this family. Will Victor allow Grace the freedom to discipline the children? Or will he take their side? How much is too much? Grace might not be their biological parent, but that doesn't give them the right to disrespect her. Everything changes when a once comfortable existence is thrown into turmoil. Every family is different, but I think a lot of people, young and old, can relate to the themes in this book. I have a step-parent, and I could very easily identify with Ava. But I could also see Grace's point of view. Does she really have the strength to continue this relationship now that she has to be a parent? This isn't what she wanted. Is Victor worth it?

By the end of the book, I wanted more. I kept thinking, this family's story isn't done yet. There is hope for them, but I wanted to keep reading about their journey. This is a book that's definitely worth reading!!

Note: I received an e-galley from the publisher (Simon & Schuster) in exchange for an honest review. But since I'm such a big fan Amy Hatvany's books...... 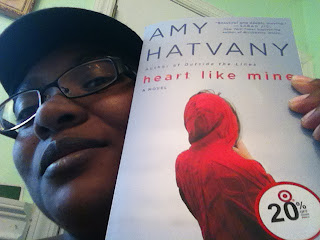