One year, and We'll Still Always Have Paris

Last year I read and reviewed We'll Always Have Paris by Jennifer Coburn. To celebrate the book's one-year anniversary, the author is back for a guest post about her Aunt Bernice and her diaries. 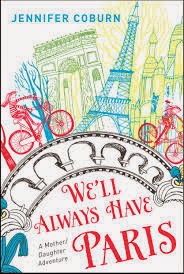 There is a great deal I will never know about my Aunt Bernice because soon after her death, her son destroyed more than 75 years of her hand-written diaries. He dumped them in the incinerator in Bernice’s condo, where I had often tossed garbage bags filled with her empty mayonnaise jars and Weight Watchers snack wrappers.
What I do know about my aunt is this: she died shortly after her ritual midnight snack, this time half a rib eye steak and mashed potatoes left over from dinner at Smith and Wollensky. Her son told me that when he came to pick her up for breakfast the next morning, Bernice had already passed away. The leftovers from her last meal were missing from the fridge, a single plate and silverware setting in the dishwasher.
Bernice had been an unusual 90-year-old hospice patient, and her exit from life served as a fitting metaphor for how she lived it: enjoying every last bite. We spoke by phone earlier that day and in her thick New York accent, she said her doctors were crazy. “End of life heart disease?” she scoffed. “I feel marvelous.”
Bernice and I often talked about how I would inherit her diaries when she died. We shared a love of contemporary art, high-fat food, and writing. I told her I wanted to write a book about her, which she said would be a total bore except for the part about the pilot that invited her to take a Jell-O bath. Or the time an ex-fiancé sued her for keeping his lavish gifts after she dumped him. And there was the mix-up with that art gallery owner that allowed her to acquire a Salvador Dalí sculpture at a fraction of its value.
Bernice told sepia-toned stories of her childhood in Brooklyn in the 1930s, complete with details of her neighbors’ cloche hats and shabby furs. I always imagined her with a fountain pen, scratching out stories about her past: how her father lost his coat factory in a dice game with a guy with a gangster name like Skinny Carmine or about how her parents planned to stage their economic comeback by running card games from their Coney Island apartment.
By the time Bernice was a teenager, the nonstop topic of conversation at home was about how her Jewish family would survive if Adolf Hitler crossed the Atlantic Ocean and came to the United States. My grandparents’ plan for Bernice was for her to be hidden in a convent. She could pass as gentile, the nuns there said. The German family living in the apartment downstairs would adopt my father, an infant at the time. Bernice’s younger sister Rita had polio, so there was little hope for her.
Bernice wasn’t all nostalgic remembrances; she opined on contemporary issues too. She thought Sheryl Sandberg – or Sandersberger as she called her – was meshugenah with her “lean in nonsense.” Bernice said when she was a young woman, she called in sick to work every Friday. “Today Goldsmith Jewelers is out of business and I’m 90 years old with a beautiful life,” she said. “So who do you think had the right idea?”
More than the storyline of Bernice’s life, I was interested in how she had remained incredibly centered and positive in the face of a fair amount of prejudice and hardship throughout her long life.
Ten years before she died, Bernice had a stroke. “A mini,” she called it. On the phone from the county hospital, Bernice told me her room was lovely and that a gorgeous bud vase sat on a table beside her bed. When she mentioned this to the nurse, she found a red carnation in the vase the next morning. “Aren’t people marvelous?” she mused.
When I found out my aunt had died, I took some comfort knowing I would revisit familiar stories, and gain deeper perspective on her life through her diaries. Her son said he threw them away because not all of her memories were happy ones. Of course that is exactly why her writings would have been so precious to me. Like all of us, Bernice’s life was filled with emotional complexity and conflicting desire. Yet she always managed to experience the profound joy and goodness in the world.
Bernice’s son may have felt ambivalence over my reading his mother’s private thoughts, but I know Bernice would have shared them freely with me. During our last visit together, my aunt asked me to read aloud to her from one of her diaries. When I asked which volume I should select, she replied, “Surprise me.” Bernice was not a person with dark secrets. She was a wise old woman from whom I could have learned a lot.
I wish I could have piled the diaries on my bedside table and leafed through every page, hopeful that I might discover Bernice’s greatest secret – how to live life fully, and yet always have room for leftovers.
Jennifer Coburn is the author of We’ll Always Have Paris: a Mother-Daughter Adventure 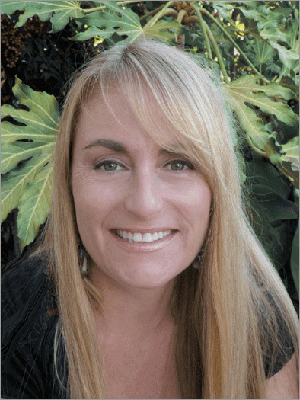