My take on: The Last Thing I Told You 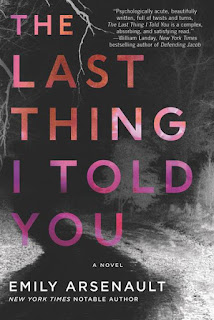 Before his death, Dr. Fabian pulled the files of two former patients, Nadine Raines and Johnny Streeter. Both of whom have troubled pasts.

As a teenager, Nadine attacked one of her teachers. Such an attack wasn't in her character, she had never done anything like that before. There were no signs, no warnings that Nadine had any violent tendencies. Despite Dr. Fabian's best efforts, he never could get Nadine to admit to him or to herself the real reason Nadine attacked her teacher. Even decades later, Nadine still can't understand it. Does Nadine blame Dr. Fabian for not helping her understand her behavior? Could that be a motive for murder?

However, with Johnny Streeter there were lots of signs pointing to his penchant for violence. Streeter is serving a life sentence for a mass shooting at a nursing home. He obviously didn't kill Dr. Fabian, but what is Johnny's connection to his former therapist's demise? And...does Nadine have anything to do with it?

Should be enough for Henry to build a case? Or is there more to the story. Yes, of course there is more to the story. Told in the alternating perspectives of Henry and Nadine, The Last Thing I Told You by Emily Arsenault, is about more than just a murder. Dr. Fabian's death is merely a catalyst to Henry and Nadine examining the depths of human behavior. Nadine is of course looking at herself and wondering how to keep the disturbing thoughts swirling around in her head from completely consuming her. Through Dr. Fabian's notes and patient records, Henry learns that not everything is as it seems. Just because a person can appear to be ok on the outside, it doesn't mean that person doesn't need help on the inside -- even Henry himself. This case has forced Henry to confront demons from his own past. It was the bullets from his gun that stopped Johnny Streeter and prevented him from killing more people, but Henry has always wondered what would have happened if he had intervened sooner? Sure he stopped a killer, but does that make him a hero? Or just someone who happened to be in the right place at the right time?

After about 100 pages, I was starting to wonder where this book was going? In my opinion it was too obvious to have Nadine be the killer. But as I got further into the story, I started to think maybe she is a killer. In the chapters she narrates, Nadine is speaking directly to Dr. Fabian. With each page, it seemed like she was apologizing to him for taking his life. But maybe she's just apologizing for not truly embracing therapy? When she began therapy, she was an aloof, self-absorbed teenager. As an adult, she has more life experiences and can look at her past with more insight. Then there is Dr. Fabian himself. He was starting to slip, forgetting patient names and mixing up patients. Was someone catching on to his behavior? Could that be a motive for murder? There were so many twists and turns. This wasn't your standard psychological thriller. I liked that there was a lot of depth to it and would definitely read another book by this author again!