My take on: The Kept Woman 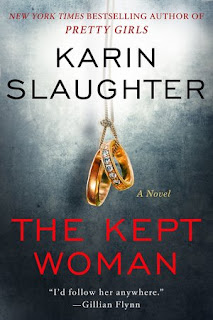 I've only read two of her books, but I have to say Karin Slaughter is one of the best crime writers I have ever read.

At first, I was a little turned off by the length of her books, they're often close to the 500-page mark. But, like a bag of chips, once you get started on one of her books it's hard to just stop at just one page or even a chapter. That was no different with the latest entry in her Will Trent series, The Kept Woman.

Of course the book opens with a murder. The murder of a sleazy ex-cop named Dale Harding.  Enter the Georgia Bureau of Investigation and special agent Will Trent and his partner, Faith Mitchell. The body was found at a construction site,  a location with ties to a rich, bad-boy, basketball player named Marcus Rippy. Will and Rippy have a complicated history. Will spent the last several months trying to send Rippy to prison for a brutal rape. But money and power made that a futile effort.

Does Rippy have any involvement in Harding's murder? If he does, then Will can finally put Rippy behind bars. The crime scene is a treasure trove of clues. There's blood everywhere but according to medical examiner Sara Linton, who also happens to be Will's girlfriend, all of the blood couldn't possible be from Harding. That means there's another victim. A victim who's somewhere bleeding to death. That someone just might be Will's estranged wife, Angie Polaski.

How does this all tie together? How does this all work? Just a couple of the many questions. Will is devastated at the prospect that Angie's life is in danger, not because he wants her back in his life but because they have a lot of history together. A history that even Sara can't break through. And on some level he still cares for Angie. Will and Angie can understand each other's pain better than anyone. But Angie has spent years emotionally torturing Will, and who knows (hint hint) she could be doing it again. I haven't read any of the other books in the series, but this told me all I needed to know about Angie Polaski's character. She's got a lot of spunk, but that's outweighed by what a monster her character can be. The first half of the book centers on the investigation, as Will and Faith delve into Harding's life including why someone would want to kill him. Karin Slaughter gets you deeply invested into that storyline and then she switches gears, telling Angie's side of the story. I wanted to get back to Will's story but I quickly got immersed in Angie's perspective. Angie's always working an angle, even if her original intentions were good she finds some way to screw it up -- and screw it up big time. I can't say too much about the second half of the book without spoiling it. But I will say, I kept wondering how the first half of the book ties in with the second. It does all tie together like the pieces of a big puzzle and I enjoyed putting them together in my mind!

Note: I received a copy of the book from the publisher (HarperCollins) in exchange for an honest review.
Posted by As I Turn the Pages at 4:36 PM