My take on: Educated 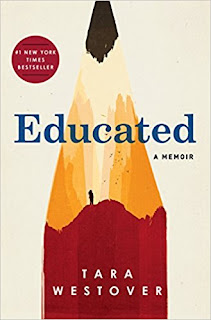 If Educated by Tara Westover was a fiction novel, I would think it was excellent. As a memoir, this was missing a level of believability and authenticity that I look for in non-fiction. My measuring stick for non-fiction is do I believe what I'm being told. I believe some parts of this book, but some were just toooooo far-fetched.

Tara Westover grew up in a survivalist, Mormon family. Tara grew up in the mountains of Idaho, with parents who were always preparing for the end of days. Her parents didn't believe in traditional medicine, her mother's herbs and oils were the only options. Tara and her siblings were all born at home, leading to them growing up without birth certificates or proper identification. Imagine not being able to prove who you are when you really need to? I certainly can't. Traditional school wasn't an option, instead Tara and her siblings were homeschooled by their mother. Working the land and making it work for you were how the family survived. Getting an education, getting a job, and integrating into regular society was not something to strive for. But some of her brothers did want out. They wanted to be free from their father's mood swings and his constant belief in conspiracy theories. They wanted an education.

Some of Tara's brothers got out. Her older brother Tyler wasn't built for mountain life, he loved books and music. He made it through college and encouraged Tara to do the same. How could she without any type of formal schooling? She studied and she studied hard for entrance exams. Against all odds she got into Brigham Young University, despite never having gone to any school prior. Going to college was a frightening experience but it was also a safe space. Another brother, Shawn, was becoming increasingly violent toward Tara. Almost to the point of killing her, all the while her parents did nothing to stop it. College was an escape. College was hard, but also eye-opening for Tara. She learned about psychology, history, mathematics, and grammar. History was particularly illuminating, as Tara learned about the Civil Rights Movement and the Holocaust for the first time. Professors and fellow students mistook Tara's ignorance of these topics as rudeness. But she genuinely knew nothing of these important moments in history because she had been taught that the outside world was evil.

Tara was getting an education, but she was stuck between two worlds. The one where possibilities are endless, and the other where only her father's word is the gospel. What do you do when you want both? You want your family in your life and you want a life of knowledge and opportunity. But what if one is more detrimental to your physical and emotional health? That is what Tara Westover was facing. That struggle is clear and believable throughout the book. What I struggled with is the description of several accidents and the subsequent medical treatments. Two of Tara's brothers and their father both have serious accidents, including severe burns of significant parts of their body. Going to a hospital, if at all, was a last resort instead Tara's mothers herb mixtures were the only forms of medical treatment. I firmly believe that modern traditional medicine does not have all the answers, but when it comes to burns and brain injuries I DO NOT believe herbs are the answers. I do not believe that a person could SURVIVE with herbs alone as medicine. That's where the story seems to venture from non-fiction to fiction. Those parts read like a novel not a memoir. I know truth can sometimes be stranger than fiction, but this book was lacking in believability for me.