Please welcome Dawn Adams Cole, the author of the debut novel Drops of Cerulean. Spanning the years 1930–2014, Drops of Cerulean chronicles the lives of Ilona, the daughter of a Greek restaurateur, who marries into a prominent Houston family; her son, Cadmus, who becomes a professor and then moves into a retirement home after his husband passes away; and Delphina, an anxiety-ridden woman with a mysterious recurring dream.
Ilona and Cadmus have a falling out when Cadmus is a young man, and before they are able to reconcile, Ilona dies. Cadmus is plagued with guilt and feels responsible for the death of his mother. Two worlds collide when, years later, Delphina comes to understand that she had been Ilona, Cadmus's mother, in her previous life. 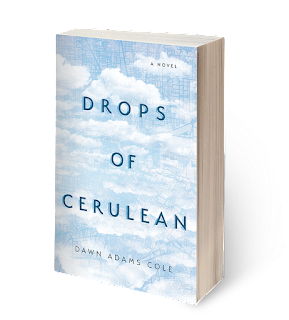 Today, Dawn Adams Cole talks about the inspiration for her debut novel.

“Everything had an intention, a purpose, a pattern. The seagulls that flew in formation along the shoreline, with each bird departing the front of the line one-by-one to take up the end; the symmetrical markings on a blue jay’s wings; the blood that circulated through the body in an elaborate system of veins – how could anyone think of playing games or memorizing spelling lists when such amazing things existed?”

The natural world was an inspiration for Drops of Cerulean. Delphina, one of the three protagonists, takes solace in nature from the time she was a child, noting symmetry and order in her everyday surroundings. Like my character, I noticed the patterns as a child, but sheer amazement over the natural world grew as I matured. During the challenging times in adult life, the awe of the natural world directly in front me provide the most comfort of a divine presence. Once I let go of my ego, I realize that I, too, am part of that world. I wanted to capture visual representations of this belief, and I created Delphina, as the reincarnated Ilona, as the character to attribute this appreciation, the visualization of universal design and ananchor for the narrative of living multiple lifetimes.

The foremost spiritual influence for the saga centered on my interest in exploring the concept of reincarnation. I remember reflecting about my soul when I was a child, perhaps as young as five years old. I struggled to reconcile the spirit inside my head and heart with my physical body. I recall wondering what constituted the real me – the stillness of my being or the body into which I was born. I could not state it then as I am now, but the struggle to understand was very real. I believe this is where my initial appreciation of interconnectedness formed – I knew I was part of something greater than myself.

There are books and stories told of people connecting with their previous lives. Some instances cite young children instantly recalling memories when they pass a particular place or meet a specific person, much to the surprise of the people to whom they are speaking. Most of my research, however, centered on books detailing people who experienced regression through hypnosis. Often times, they shared details of former lives that were later confirmed through historical records. The experience confirmed the source of predilections and talents, and at times the source of a fear or negative tendency was brought to light, which resulted in a healing of sorts. Delphina received this healing.

While the spiritual concepts served as the inspiration for the novel, the piece needed a foundation for setting and characters. As a native Houstonian and as a resident of the historic Heights neighborhood, the setting very much selected itself. Houston is now a cosmopolitan city, but the Houston in my memory bears an industrial, gritty narrative that echoes a can-do spirit. My great-grandfather immigrated to Texas and founded a machine shop in East Houston in 1929, around the time Houston entrepreneur and philanthropist Jesse Jones helped spare the city from the full impact of the Great Depression by bringing together city leaders to insure no Houston bank would fail during this economic downfall. My family’s bold move to continue pursuing their dreams despite the times folded into the spirit of the novel’s key Petrarkis and Doyle families, a sentiment not unusual for optimistic Houstonians of the time.

The primary neighborhood in the novel, Houston Heights, embodied this ethos, which is one of the reasons my husband and I decided to settle here in 2004. Founder Oscar Martin Carter envisioned a planned community where the wealthy and working class could live alongside one another. Heights Boulevard, modeled after Commonwealth Avenue in Boston, housed impressive Victorian homes while bungalows settled on the surrounding streets. I enjoy walking throughout my neighborhood and admiring the historic homes that remain today. My love for history centers on the humanity of the people who came before us, on my belief that we share commonality on our desires and search. As I took walks throughout Houston Heights, the spiritual thoughts that were the genesis of the saga became rooted in the specifics of the neighborhood. The historical context of the city and neighborhood gave shape to the metaphysical narrative.

As a writer I look forward to exploring how we are alike, a concept that on one hand seems obvious, but on the other hand is foreign to so many during these highly polarizing times. I reflect on the belief in one lifetime followed by eternal redemption or damnation. While it is a commonly held religious tenet, it does not seem to garner the love and urgency to do the good that it is supposed to engender. So much judgment and hatred comes in the name of religion. I wonder if rethinking the concept of an eternal life with no definitive end, with only an eternal, interdependent connection to all creation, would result in better outcomes in current, everyday lives? 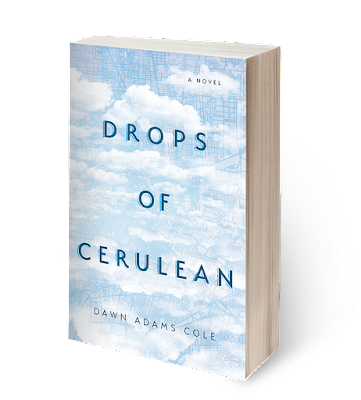 About the Author
Dawn Adams Cole was born and raised in Houston. She received her BA from the University of St. Thomas and her MEd from Harvard University. She lives in The Heights with her husband, Burton, and her daughters, Caroline and Elizabeth.