How about a Giveaway?


An Invisible Thread from UMBRASOLUTIONS on Vimeo.

Intrigued? Thanks to Authors on the Web, we have a copy of An Invisible Thread by Laura Schroff and Alex Tresniowski. How about a little sneak peek of the book?

"'Excuse me lady, do you have any spare change?'

This was the first thing he said to me, on 56th street in New York City, right round the corner from Broadway, on a sunny September day.
And when I heard him, I didn’t really hear him. His words were part of the clatter, like a car horn or someone yelling for a cab. They were, you could say, just noise—the kind of nuisance New Yorkers learn to tune out. So I walked right by him, as if he wasn’t there.
But then, just a few yards past him, I stopped.
And then—and I still don’t know why I did this—I came back.
I came back and I looked at him and I realized he was a child. Earlier, out of the corner of my eye, I had noticed he was young. But now, looking at him, he was just a baby—tiny body, sticks for arms, big round eyes. He wore a burgundy sweatshirt that was smudged and frayed, and ratty burgundy sweatpants to match. He had scuffed white sneakers with untied laces, and his fingernails were dirty. But his eyes were bright and there was a general sweetness about him. He was, I would soon learn, 11 years old.
He stretched his palm towards me and he asked again: “Excuse me lady, do you have any spare change? I am hungry.”
What I said in response may have surprised him, but it really shocked me.
If you’re hungry, I said, I’ll take you to McDonalds and buy you lunch.
“Can I have a cheeseburger?” he asked.
Yes, I said.
“How about a Big Mac?”
That’s okay, too.
“How about a Diet Coke?”
Yes, that’s okay.
“Well, how about a thick chocolate shake and French fries?”
I told him he could have anything he wanted. And then I asked him if I could join him for lunch.
He thought about it for a second.
“Sure,” he finally said.
We had lunch together that day, at McDonalds.
And after that, we got together every Monday.
For the next 150 Mondays.
His name is Maurice, and he changed my life." 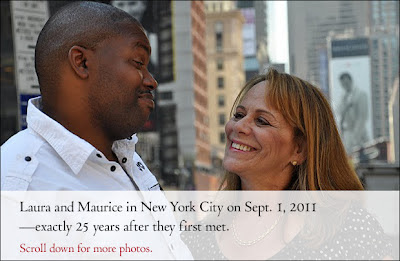 The giveaway is open to U.S. and Canada residents. There is no special form. Leave a comment on this post and a winner will be chosen at random by next Tuesday. All I ask is that you be a follower of my blog. Happy reading!!