My take on: Season of Wonder 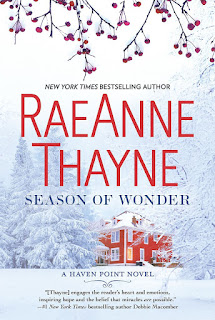 Festive times calls for a festive read. Just look at that cover, it just screams Happy Holidays! I saved Season of Wonder by RaeAnne Thayne specifically for this time of the year. I relished the opportunity to read something positive and uplifting.

Single mom Dani is starting a new life for herself and her daughters, Silver and Mia, in Haven Point. Small-town Idaho, where everybody knows everybody, is very different from the hustle and bustle of New York City. But it's just the change of pace her family needs. Dani is trying to escape the shadow of her now deceased ex-husband's misdeeds. Her ex was a thief and a murderer, and in Dani's mind she can never run far enough from his crimes. Dani's not a criminal and neither are her children, but she's afraid people will think badly of her family if they know the truth. The fewer people who know the truth, the better. Only Dani's boss, a retiring veterinarian, knows about her past and she'd like to keep it that way. Dani has a chance to take over the veterinary practice and she's not going to let anything derail that, including handsome deputy sheriff Ruben -- who just happens to be her boss's son.

Wanting and seeking happiness beyond her work and life with her daughters, just isn't in the cards for Dani. Despite a mutual attraction to Ruben, Dani runs from him at every chance. She's afraid to trust. She's afraid to love. She doesn't believe she deserves any of it. As a former foster kid, Dani has trouble building lasting relationships. But fate often has a way of intervening. Ruben quickly becomes a constant in her life, saving teenage Silver from following in her father's footsteps and forging an instant friendship with six-year-old Mia. No matter how hard Dani tries, Ruben is always there to show her there are good people in this world.

This was a welcome change of pace. For most of this year, I think I've been on a fantasy and thriller kick. I haven't read a lot of romance lately, but I'm glad I read this one. I didn't like the instant attraction that Ruben and Dani had. As soon as the book begins, the reader already knows Dani and Ruben like each other. I kind of wanted a couple more chapters before the attraction became clear. I liked Ruben's relationship with Silver's children. He genuinely cared about them regardless of Dani constantly rejecting him. Dani eventually realized it's ok to want happiness not just for her daughters but also for herself. Overall, this was cozy, and endearing story.

Note: I received a copy of the book from Little Bird Publicity in exchange for an honest review.
Posted by As I Turn the Pages at 12:01 AM