My take on: Start Without Me 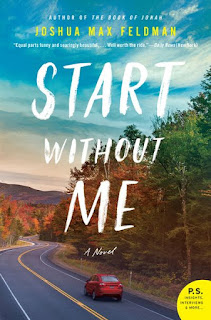 It's holiday time, so it's time for holiday reads! In Start Without Me by Joshua Max Feldman, for the first time in years Adam has an invite to the Thanksgiving table. After several failed rehab attempts, the recovering alcoholic is facing the daunting task of spending the holiday with his family. A holiday meal is something most people look forward to, but not Adam. It means he has to talk to his parents, talk to his siblings (and to their families). It means no alcohol. It means being present and accountable -- something Adam struggles with in his sobriety.

Simple tasks pose a challenge, like making coffee for his family. Adam accidentally breaks the coffee pot and flees the house because he's afraid of the consequences and the potential judgment from his family. To him, it makes more sense to flee the family home in Connecticut and head back to the safety and routine of his new home in Seattle. But a chance encounter at an airport restaurant derails Adam's chance to runaway.

Like Adam, flight attendant Marissa is dreading Thanksgiving dinner. A marriage riddled with strife about race and money, is only going to get worse if Marissa's husband, Robbie, finds out she's pregnant with a baby that's not his (not a spoiler since that little tidbit is revealed very early). When Adam asks to sit at her table, Marissa borders on saying no but says yes. It's a decision that helps and hurts both Marissa and Adam. It helps that they have someone to talk to. But it also hurts that they have someone to talk. Each can be objective about the other's problems. Each person serves as a welcome distraction to their own problems. It's easier for them to talk to a stranger because you don't have to worry about disappointing a stranger. While neither is ready to face their problems, a friendship is born. A friendship that leads to a troubled, sad, funny, and heartwarming road trip.

I would call this the dark and satirical book version of the movie Planes, Trains, and Automobiles. Two strangers who wouldn't otherwise be friends find a way to confront the past so that they can move forward in the present. Like real life, nothing wraps in a neat little bow. Both Adam and Marissa have to face the messes they made and by the end there is some hope for the future. I loved this book, and I think you will too!