My take on: The 7 ½ Deaths of Evelyn Hardcastle 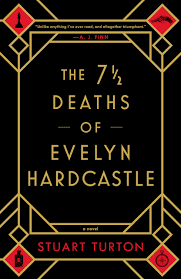 I tried, I really tried to understand The 7 ½ Deaths of Evelyn Hardcastle by Stuart Turton, but I just don’t get it.

The concept behind this book – murder mystery meets Groundhog Day – is certainly inventive but I thought the execution was overly completed and convoluted.

There’s a big party at Blackheath mansion. The party is hosted by the Hardcastle family. But this party will end in murder. Evelyn Hardcastle will die at 11 p.m. It’s up to Aiden Bishop not to stop her murder but to solve her murder. He has eight days and eight different hosts to work with. Each day is the same, except each day he will wake up in a different host. Their memories are a bit of a jumble for Aiden. He doesn’t know which ones he can trust and which ones he can’t. Solving the murder will not come easy, as there is a person or persons working to sabotage Aiden’s quest. Aiden makes some allies, and is determined to not only solve the murder but to prevent it.

That’s the book in a nutshell.

Numerous glowing newspaper articles and YouTube reviews convinced me that this book was worth reading. So I bought it months and finally finished reading it recently. The book reminded me of some Agatha Christie books, Evil Under the Sun and Death on the Nile. Guests are sequestered at a remote location, a murder happens, and it’s up to one astute person to solve it. Only with this book, solving the murder involves soooooooooooooooo much plotting it was hard to follow. Most of the time I take notes on the books I read, but just so I can recall some details when it comes time to write reviews. With The 7 ½ Deaths of Evelyn Hardcastle I felt like I was studying for test I was bound to fail.

The story is not linear, which isn’t always a bad thing for a book. With this story, when Aiden wakes up in a different host he’s not waking up at the time of day every time. The day doesn’t automatically start from the beginning when the host falls asleep. Aiden re-emerges inside his hosts at random parts of the day. At times, there are long gaps between hosts and the reader is left trying to remember what happened earlier. When the mystery is finally solved, I was not impressed. The ending seemed to come out of left field, and relied on a lot of things going right (which of course they don’t).

The concept of this novel is great, but the end result, in my opinion, fell flat.