My take on: The Great Pretender 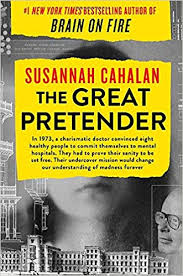 Recently, I had the opportunity to hear Susannah Cahalan speak about the inspiration for her latest book, The Great Pretender. To hear her speak about this book felt like a bit of a detective story, one that I wanted to read.

Her own experience of being misdiagnosed with a mental illness left Susannah with a keen sense of empathy and understanding for those who are actually mentally ill. Upon hearing about a famous study, On Being Sane in Insane Places, she felt the need to investigate further. In 1973, Stanford psychologist David Rosenhan and seven other people sought to understand or expose the mental health system, by pretending to be insane. With just a few symptoms, hearing voices that said “thud, empty, hollow” led to varying stays in mental hospitals and overwhelming diagnoses of schizophrenia. How could seemingly “sane” people be labelled as “insane”? What does it say about doctors and the entire mental health system if they could be so easily fooled by “sane” people? Plus, why would anyone subject themselves to this kind of study? At the start of this journey, Susannah had a deep respect and admiration for Dr. Rosenhan. In his own way, he was trying to help. But did he help? That’s the big mystery Susannah was trying to solve.

It’s been sooooooooooo long since I read a non-fiction book cover-to-cover. Full disclosure, I work at a book publisher (not the one that published this book) on non-fiction books. Because I work on non-fiction five days a week, I rarely read it for pleasure. But I was fascinated by this book. I had never heard of this study. I understand the point of doing a study like this, but what about the long-term impact on the participants? Many of the people, a.k.a. pseudopatients, were put on heavy-duty medication – not everyone was able to fake swallowing the pills. How does that effect there psyche going forward? I’m not entirely clear if it was an ethical breech for Dr. Rosenhan to be an actual pseudopatient, but it sure looks that way. How could he be objective when might have had a predetermined outcome?

The results of the study showed there was an emphasis on medication versus actual treatments, like therapy. Shove a pill down someone’s throat and hope they’re cured of depression or of hearing voices. Looking into the benefits of alternative therapies seems to be a modern-day technology. Some good came out of On Being Sane in Insane Places, the criteria for mental diagnoses became more stringent. But as Susannah delved deeper into Rosenhan’s records, she found his research was lacking. He took liberties, stretching the truth into outright lies. There were lots of holes/inconsistencies in his methodology. It’s quite possible that not all of the pseudopatients even exist. Did he just make things up? Who knows, but he definitely twisted things to fit a narrative rather than just reporting the facts. Would such a shoddy study be published in a medical journal today? I’d like to think it couldn’t happen, but anything is possible.

This book was compulsively readable but sad at the same time. In modern society, the mental health system isn’t much better than it was in 1973. Instead of being treated in hospitals, the mentally ill are more often to be found in prisons or homeless. It’s hard to get into a hospital, due to the lack of beds, doctors, and treatment. The book ends where it began, “If. . .sanity and insanity exist. . .how shall we know them?” (Pg. 298). I'm not sure.

Rating: Superb
Posted by As I Turn the Pages at 2:29 PM