The Help: Movie vs. the book 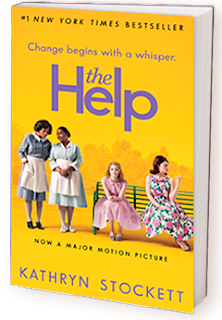 Over the years, I have seen some great movie adaptations and some really, really, really bad ones. The good: A Tree Grows in Brooklyn, Like Water for Chocolate, Jurassic Park (although the third one sucked beyond belief), and Lolita to name a few. The bad: White Oleander and sadly My Sister's Keeper. I love Jodi Picoult books, and I had high hopes when I heard that My Sister's Keeper was being made into a movie. The day before it came out I read a newspaper review, and was instantly disappointed. Those of you who read it know about the ending. When Hollywood got a hold of it they decided the ending needed to be changed. That turned me off and scores of fans off the movie. I never saw it, but I know the movie can't be good if a HUGE PLOT POINT is changed. And I do mean HUGE PLOT POINT. Taking it out changed the spirit of the book.

What does all of this have to do with the movie adaption of Kathryn Stockett's book The Help? I loved, loved, loved the book. When I heard it would be made into a movie, I was super-excited. Then I heard Viola Davis and Sissy Spacek were going to be in it, I had high hopes. Such great actresses, they can't screw it up right? After seeing the movie today, I think they got it right. Sure there were some things left out, tweaked, but overall it was a good movie. It would have been better if the couple behind me wasn't talking throughout the movie. Had they been my age I would have said something, but I must respect my elders!! Instead I rolled my eyes several times.

On to the movie, Emma Stone did a good job as Skeeter. I've never seen any of her movies, but I think she will be around for a long time. Jessica Chastain (Celia) and Allison Janney (Charlotte) have their moments, too. Sissy Spacek (Miss Hilly's mom) was hilarious in the few scenes she had. But I feel this movie belonged to Viola Davis (Aibileen), Octavia Spencer (Minny), and Bryce Dallas Howard (Miss Hilly).

I saw Bryce Dallas Howard in the last Spiderman and thought she was an Ok actress. After seeing her in The Help, I was amazed that it was the same person. I read some reviews saying she was miscast, I respectfully DISAGREE!! I left that movie hating her character just as much as I did in the book. To me that's the mark of a good actress. She played the role of the Queen Bee, ice cold racist of 1960s Jackson, Mississippi rather well. And, fear not the...um....chocolate pie plot point is still in the movie. It would have been a huge mistake if it wasn't. If you read the book, you know what I'm talking about.

Octavia Spencer played Minny with a lot of humor, boldness and strength. There were moments when you laugh out loud at her character, and other times you can feel her vulnerability.

I saved the best for last -- Viola Davis!! Her last scene with Bryce Dallas Howard just might get her an Oscar. Aibileen's character had just rough life. Her son died, but to her employer Miss Leefolt (Ahna O'Reilly) it was just another day. Sometimes you want to cry right along with her character.

I'm not sure I could choose which was better. The movie or the book? The book has a lot more rich details to it. But seeing the words brought to life on the screen was great. I would give the book a slight edge (so much that I want to re-read it).

Of course there are people who would disagree with me. Working at a newspaper, I had the chance to read dozens of stories that came across the wire. Some good, some bad. The criticism about the book followed the movie. What can a white woman (Kathryn Stockett) tell us about racism in the 1960s? Is Stockett pandering to the black community? Why would Viola Davis demean herself by playing a maid? Kathryn Stockett has been sued and will most likely be sued again over the book. Some of the reviews I've seen completely ignore that the book came first. Instead Hollywood came up with another way to make itself look good by making a movie to show how wrong racism is.