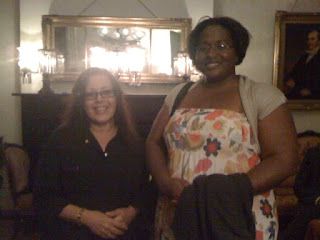 Am I really that tall or is just the photo? In this wonderful blogging world the opportunity to attend a book signing often presents itself. Here I am with author and psychic medium Linda Lauren at the Merchant House Museum for the launch party of her book Hostage in Time. What's the book about? Here is a little description from Amazon.com:


"For photographer Amanda Lloyd, being hired to film the historic Serenity house, home of Thomas Edison’s patent attorney Jonathan Brisbane, is a straightforward gig. Filming during re-enactment day, Amanda begins to explore the home, including the prohibited third floor. Suddenly and without warning, Amanda finds herself transported back in time to 1884 where, because she is brandishing her camcorder that he mistakes for a weapon, she is accused by Brisbane himself of being a spy in search of Edison’s secrets. Immediately placed under house arrest, she finds herself a hostage to history."

Intrigued? I am. I had a few misadventures making my way to the Merchant House Museum. I got off the train just fine. But I end up going in the wrong direction, taking a nice little stroll around Washington Square Park -- twice!! It's been awhile since I've been in the Village. After a nice 40 minute walk, I found it. I cool off with a little seltzer, and I'm ready. Linda Lauren was very nice and engaging. She signed my book to boot!!

Later in the evening there was a little Q&A session with Linda Lauren. The first question was had anyone ever experienced time travel. Apparently it's a lot different from deja vu. With deja vu you know you've been to that place. You're just experiencing the event again. With time travel you haven't been there before. She described several instances of experiencing time travel. I'm a bit skeptical. If I haven't seen it or have concrete proof, I have a hard time believing.

All-in-all it was a great experience. The Merchant House Museum is full of history as well. 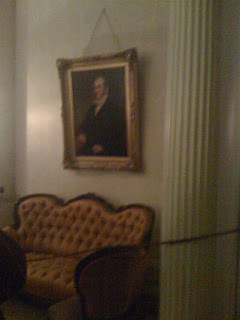 Here we have Seabury Tredwell. A moody-looking fellow isn't he? I guess no one took happy photos in the 1800s. How about his wife Eliza Tredwell? How does she look? 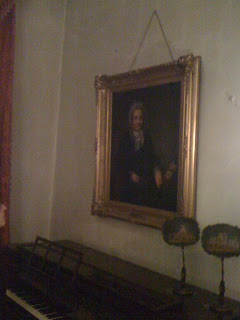 Being married to that chipper fellow couldn't have been easy. The Tredwells had five girls and two boys. The home where the Tredwells raised their family is now a museum. The home is full of original details. Even the beds are still in the home. 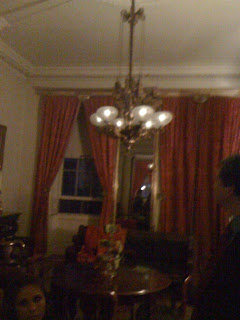 It might be hard to tell from the photo, but those are the original moldings on the ceiling. The chandelier is the same, although it has been adapted with an electrical current. Some of the gold pieces on the curtains are also original. There a few ghost stories, too. Despite living here all of my life, there is so much to New York that I have yet to experience. I had a great time!!