In honor of banned books

I don't believe in banning books ever. If you're worried about your child reading a certain book, be a parent and don't let them read it. Trying to ban a certain book for everyone isn't right. In honor of Banned Books Week, I decided to list my favorite banned/controversial books, and a list of banned/controversial books I want to read. In no particular order, let the fun begin....


Top 10 banned/controversial books I have read:

1. Lolita by Vladimir Nabokov: There is a little story that goes with this one. I read about it in newspaper article while I was on vacation in Montauk. I went to the local bookstore, but they didn't have it. Bummer!! But the nice woman at the store ordered it for me. I practically stalked the store until it came two days later. I finished the book in three days. The following semester it was assigned in one of my English classes. Fortunately, I had a leg up on the class for that one. I love the book, and highly recommend it. Yes there is sexual content in the book, which is why it's most often taught in college classes.

2. Bridge to Terabithia by Katherine Paterson: I read this a long, long, long, long, time ago. The book shows the power of a child's imagination. Why is this book controversial? It also takes about death. Wow, really? People don't want kids to know about death? Want your children to sheltered? It helps to have books out there to help children deal with death.

3.  The Handmaid's Tale by Margaret Atwood: I'll be honest, I hate this book. I was forced to read it in a college class by a professor I also could not stand. Perhaps that clouds my judgment on the book. The content is innovative, but I found the book to be boring. The book has often been accused of being anti-Christian, which I guess is what makes it controversial. Why have it on my list? You would think I wouldn't care, but it's on here because I don't believe in censorship.

4. Annie on My Mind by Nancy Garden: I can't remember when I read it. I think it might have been junior high school. It centers around the budding romance between two teen girls. Hide your children because we don't want them to know about gay people!! What crap!! I plan to reread this one.

5. I Know Why the Caged Bird Sings by Maya Angelou: One of the greatest writers out there, and she should never be banned.

6. The Color Purple by Alice Walker: I think I like the movie a little more than the book, but another example of fine literature.

8. The Catcher in the Rye by J.D. Salinger: Profanity, sexuality, and teenage angst. Oh, the horror!! Don't the children get any ideas. Lets make sure they are sweet and virginal. If they don't read about it, they won't know about these things!!!

9. The Great Gatsby by F. Scott Fitzgerald: I don't get banning this one at all. I guess the roaring 1920s and prohibition can rot the brain.

10. Invisible Man by Ralph Ellison: It was written during an era (1953) when black people weren't supposed to exploring their identity, nationalism or racism.

The list could go on, but that's what I came up with.

1. Harry Potter series by J.K. Rowling: I bought the entire set months ago. Controversial or not, I feel left out of the loop when talking to my fellow book nerds.

2. To Kill a Mockingbird by Harper Lee: I'm ashamed to admit I haven't read this one. It seems books that deal with rape and racism tend to make lists like these.

3. Speak by Laurie Halse Anderson: I own this one, but haven't read it yet. I bought it when I saw articles slamming it during banned book week last year. Want to guess what this book deals with? Rape.

4. The Lovely Bones by Alice Sebold: I found the movie to be a little on the weak side, but I have high hopes for the book.

5. The Giver by Lois Lowry: A world where everyone is supposed to be happy, except one boy Jonas who thinks to question it. The problem here, I'm not sure. Kids questioning society, can't have that.

7. Carrie by Stephen King:  I loved the movie. Sissy Spacek was awesome. I own several of his books, but I have only read one (Misery). His books are soooooooooooooooooooooo long, I get a little gun shy when it comes to carving out time to read one. What's the big deal with Carrie?  Don't really know.

8.  Cut by Patricia McCormick: A girl who struggles with cutting herself. Will this give more teens the idea to cut themselves? I don't know. But perhaps it will help those who struggle with cutting to stop.


9. Choke by Chuck Palahnuik: Some parents in Arkansas object to the language and sex addiction. I agree it's not for young children, but there's nothing wrong with a mature teen reading it.  Teens know more about sex than they let on, and banning books won't stop that. 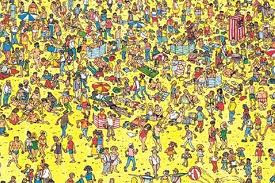 Where's Waldo? by Martin Hanford: I'll be honest I have no interest in finding Waldo or reading a children's picture book. But I put it on the list for the sheer absurdity of people who tried to ban a picture book. Why do some people have a problem with Waldo? Well if you look at some of the pictures hard enough you can see some topless men in the photos. There is a little extra exposed skin on several people in the photos. Really? Don't some people have better things to do?
Posted by As I Turn the Pages at 3:41 PM