My take on: Invisible 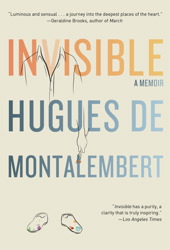 Just last week I walking through Penn Station during rush hour. As I was walking toward the exit I noticed a blind man making his was through a crowd of people. A woman was helping he toward an exit, but I got the impression that was the extent of her help. I wondered how he would navigate a busy Eighth Avenue. Was he born blind or did he lose his sight later in life? I admit I felt a little sorry for him. What does all this have to do with Invisible by Hugues de Montalembert? After reading his book, I thought I should change my perception of people with disabilities.

Hugues de Montalembert was attacked in his NYC apartment in 1978. The violent attack left him permanently blind. He had to learn how to live all over again. People told him not to jump back into the world too fast, something he didn't always listen to. He walked the streets of New York by himself, despite being in a rehabilitation center for a short period. It's hard to give up the freedom you had become so used to.

"REAL BLINDNESS is fear. If you don't dive into the action and stay alive and awake and aware and enjoy your life with a free mind, it is due to fear. Fear of life is the first enemy of the blind."

I think a lot of people are living their life in a state of blindness. We're afraid to fail. Afraid to fall.

Diving into the chaos of NYC having barely learned a new skill set, seemed both brave and stupid on the part of de Montalembert. Brave because he faced a problem head on. But also stupid because he could have hurt himself. After leaving the rehabilitation center, he did so many things people thought he couldn't or shouldn't do. Traveling alone to India and even creating a ballet. It's very inspiring that he didn't let blindness get him down. Giving into that "woe is me" attitude wouldn't help.

Towards the end he brings up a very good point. He struck up a conversation with a cab driver, who saw his entire family killed in front of him. This man has his sight, but no one would ever know it just by looking at him. People walk around with all kinds of internal wounds, but most will only notice the physical wounds.

This is a very compact memoir. I wish there was a little more depth to it. I wanted him to dig more into his feelings rather than his experiences. But overall it will make you take stock of your life. Are you living in fear or not? Are you making the most of your life or not? It won't take you long, so make sure you read this book.


Note: I received a copy of the book from the publisher (Atria Books) in exchange for an honest review.
Posted by As I Turn the Pages at 6:01 AM